Today, I’m announcing the start of a project that has been a long time in the making: the William Mougayar High Growth Cryptoassets Index, based on the ICONOMI platform, with a symbol: WMX.

My experience with tracking stocks and constructing indexes dates back to the Internet days when I created the B2Index in 1998, and it was the highest performing Internet index at the time.

For nostalgia sake, I digged-up an old headline and snippets from the press release, dated November 16 1998:

“Business 2.0 Unveils the B2Index to Track Stock Performance of Publicly Traded Net-Ebusinesses; With a Performance of 214% for the Year, B2Index Outperforms All Other Internet Indexes

The B2index is comprised of two parts: the B2Index-p and B2Index-m, each one offering different views on market data. The B2Index-p is a price-weighed index, based on $100 equally invested in each stock, and similar to the construction of the Dow Jones average. The B2Index-m, a market capitalization index, mirrors the construction of the Nasdaq Composite. With each beginning on Dec. 31, 1997 at 100, the B2Index-p closed at 259.96, up 159.96%, and the B2Index-m closed at 313.97, up 213.97%, as of Nov. 13, 1998. The B2Index, along with key valuation data for 39 ebusiness companies, will appear each month in Business 2.0 and is updated weekly online on the last day of trading for the week.”

That index did very well, and outperformed all others for 2 years in a row. The only problem is that it was a paper index. You couldn’t trade it. The listings barriers were too high at the time. 19 years later, I get my revenge and a chance to manage a tradable cryptocurrency index.

In this case, I’ve constructed a basket of 15 cryptocurrencies with a variety of weighting for each one of them. This composition will be revised continuously and may change on a monthly basis. The choice of tokens was limited to what’s available on Iconomi. There were some that I wanted to add, but they are not yet supported yet. As new tokens become available, they might make their way into the WMX index which will be re-balanced accordingly 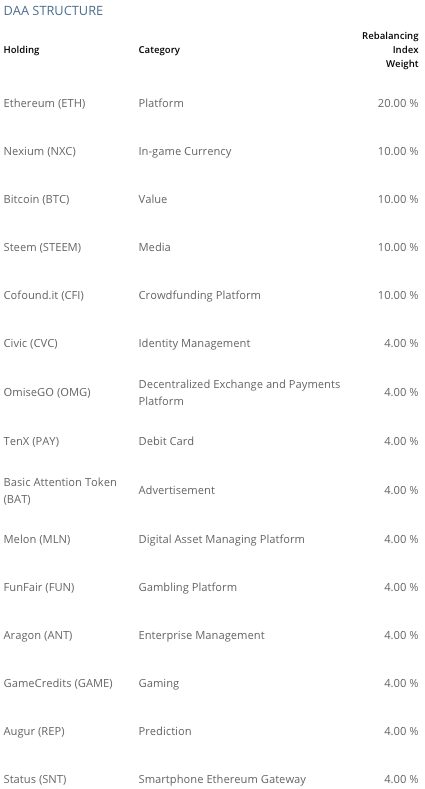 You can also read about this announcement on CoinDesk, on the ICONOMI blog, and via the official press release.

This announcement and its related social media appearances do not constitute or form part of, and should not be construed as, any offer for sale or subscription of, or any invitation to offer to buy or subscribe for, any securities, nor is investment advice or counsel or solicitation for investment. Full terms of use and disclaimer are published on iconomi.net. William Mougayar is an advisor to Steem, Cofound.it and was a previous advisor to the Ethereum Foundation. This index is not available to residents of Canada or the United States.