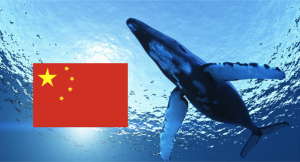 In the past 3 weeks, news that the Chinese government was cracking down on ICOs and forcing cryptocurrency exchanges to halt trading has sent the markets tanking.

Trading volumes on the cryptocurrency exchanges are down significantly, and the pull-back in activity is not just from the Chinese Yuan and exchanges, but across all currencies and global exchanges. (see the following 2 charts, from http://data.bitcoinity.org/) 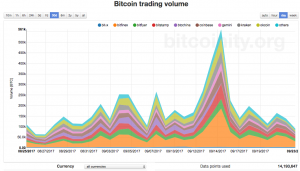 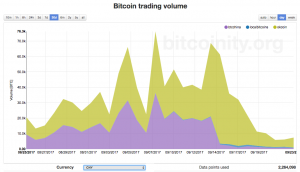 We can analyse what we know and don’t know, and give some context to these developments.

First, let us be reminded that Chinese regulators and authorities decisions and policy statements are aimed at the Chinese market. They are not directives for the rest of the world to follow. China’s government scope is at the national level.

Second, the timing of this crackdown may be related to the upcoming 19th National Congress of the Communist Party of China (CPP), scheduled to start on Oct 18th 2017 in Beijing. That is one of the most important meetings in China’s political calendar, and it has been widely reported that the latest announcements are politically motivated muscle-flexing by the CPP.

We know the following:

So it was expected that some kind of order was overdue. The political coincidence made the moons align more squarely for that perfect storm to take hold.

Despite this turmoil, the global fundamentals behind blockchain, cryptocurrency and ICOs are intact. As much as one would like to think that what China does doesn’t matter, the reality is that when China sneezes at crypto, the rest of the world catches the cold.

For one, Chinese partcipants represent 30-35% of many ICOs, so their absence has been felt, even if the ban doesn’t officially affect non-China ICOs. Some ICOs who had Chinese investors on their radar (via KYC pre-registrations or direct contacts), have experienced a downturn in money raised from that specific region.

Second, the share of Chinese exchanges on total cryptocurrency volumes used to be close to 45-50% before the ban, and now estimated to have dwindled to perhaps about 15%. Some Chinese users can still get away with trading by using VPNs and accessing external exchanges.

With all that backdrop, let us be reminded that China has also previously banned Facebook and Google, but those companies continued to thrive, while China promoted their own versions of these services (Weibo, RenRen, Baidu Tieba). Furthermore, China has its own Twitter (Weibo), YouTube (Youku Tudou), Yelp (Dianping), Tinder (Momo), Apple (Xiaomi), Uber (Didi Kuaidi), PayPal (Alipay), eBay (Taobao), and other home-grown social media giants like WeChat and Tencent QQ.

You get the idea? So, why not expect China to have their own cryptocurrency too, not based on Ethereum or Bitcoin, but based on their own currency, the Chinese Yuan?

That brings me to the next big rumor coming out of China, which is the possibility of issuing their own crypto Yuan. This shouldn’t come as a surprise given that reports that China’s Central Bank has been looking at the digital currency have been around for more than 1.5 years.

What remains unknown is if this current hiccup will affect the Chinese Bitcoin miners supremacy, which stands at about 80-85% of total market share. So far, miners have not been affected, but I am sure they are worried. Several questions arise:

Going forward, my predictions on China are:

In summary, China wants control, and China will get control. That’s their default modus operandi. Crypto-Tech is no different than the Internet and Web businesses.

What happens in China doesn’t always stay in China anymore. We have not seen the last of that whale’s boat capsizing moves.