Raising Tokens to Build a Company or an Ecosystem? 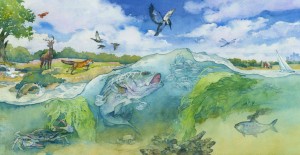 We need to keep thinking of new roles for the token. I’ve already outlined about 20 such roles in this previous post, Tokenomics: A Business Guide to Token Usage, Utility and Value.

In light of the increasingly larger amounts of tokens being raised recently, I’m beginning to wonder that the intent of these big raises may not just to be to build a company, but also to bootstrap an ecosystem and invest in incentives for user engagements.

Specifically, Civic will allocate 33% of their tokens for distribution to incentivize participation in the ecosystem. Bancor will use 20% (or more) of their token proceeds for their “reserve”, a segment that is apparently needed to run their token liquidity scheme. The IPFS / Filecoin relationship is another interesting case, where Filecoin (upcoming token sale) will be the way to incentivize users to store IPFS content (from IPFS applications for example). I wouldn’t be surprised if other upcoming token sales might do similar things, where the user incentive is built-into the token’s utility.

When I did the OpenBazaar first round of financing in 2015, along with USV and Andreessen-Horowitz, we specifically included in those terms, that a % of that money raised had to be used with their ecosystem of developers who were building applications on top of their protocol. That was another way to incentivize the ecosystem.

The key thing that needs to happen is the explicit linkage of the token with the usage, whether that usage is directly linked to the end-user or the developer.

With Steemit as an example, the tokens are inside a logged user’s wallet, and you use them to actually spend on voting, commenting, publishing, etc, and when you earn something, it goes straight into your wallet. So, the token wallet operation is intrinsically linked to the actual usage of the product.

I’d like to see more cases like Steemit who figured this out, more than a year ago, as soon as they launched.

Building a new company is already hard. Bootstraping an ecosystem and a community of users at the same time as building a product is even harder.

With the influx of available cryptocapital that has become widely accessible, it’s going to be interesting to watch what happens next, because companies now have the luxury of raising enough money to build simultaneously a product, a company, and an ecosystem.