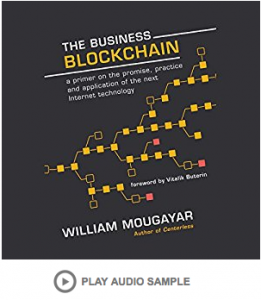 About six months after the release of The Business Blockchain, the much requested and awaited audible version is now available.

The way this works is that a narrator is chosen, based on choices in types of English, style and tone. The narrator for my book is Christopher Grove. He has quite a repertoire of work under his belt, and I am very pleased with the results for my book. This is his bio:

“The son of a university professor and a social worker, Christopher Grove was born in England and raised in Canada in the late 1960s and 1970s. He moved to New York City in the early 1980s to study acting at the prestigious Circle-in-the-Square theater school at Broadway and 50th Street. After continuing his education overseas at the legendary London Academy of Music and Dramatic Art, Chris moved back to New York and soon got his first professional gig at Joe Papp’s Public Theater in a production of Henry V, starring Kevin Kline. A subsequent move to Los Angeles in the late 1980s has led to a steady list of guest-star work on television (ER, CSI: New York, Criminal Minds, Boomtown, The Court and more), in film, and on stage at, among other venues, the Tony-award winning Mark Taper Forum. Chris is also an accomplished writer whose articles and op-ed pieces have been published in the Los Angeles Times, the Los Angeles Daily News, Daily Variety, the Hollywood Reporter, Madison Magazine, and more.”

Here is the link to the Audible page (Audible is an Amazon company, so you can use your Amazon account), and where you can play a 5 minute sample for free. The whole book can be read in 5 hours 11 mins, which is about the driving time from Toronto to Montreal, or a flight from Toronto to San Francisco.