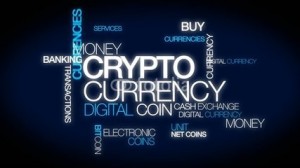 The decentralization effects of blockchain-based cryptocurrencies are hitting the venture capital industry in more ways than one. Whereas the traditional venture capital industry is boring, the crypto-tech industry has become more exciting. Actually, I see the two models as diametrically opposed: one is a closed market, dominated by command-and-control practices, led by a few rich people on Sand Hill Road. The other is a widely open global market where anyone can play, and where the gains and risks are more evenly distributed.

This has led to a re-thinking of how startups who are operating in the blockchain space can raise money, and it has potential implications that will revamp the relationships that venture capital firms can hope to strike with these startups.

As an investor, advisor or board member, I have been closely associated with a variety of early stage companies that are tackling the innovation explosion around cryptocurrency and blockchain-based models, and have had the fortunate insights of seeing where we might be headed.

The upcoming shifts are encapsulated in the following table, covering 9 variables. 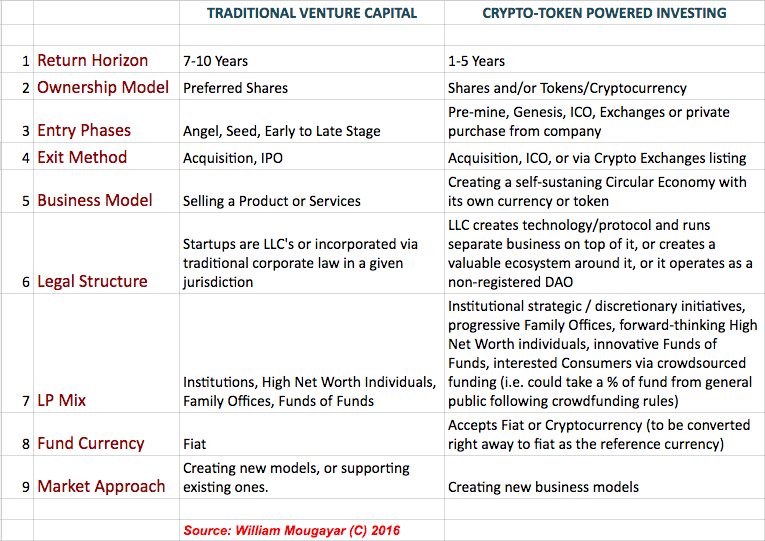 So, what is new about this environment?

Return Horizon. Whereas the return horizon for traditional VC funds is squarely in the 7-10 year horizon, we are currently at the beginning of an inflection point in cryptocurrency-led valuations, resulting in much shorter liquidity options for early investors, in the 1-5 year range.

Ownership Model. Traditionally, VCs receive preferred shares by buying private equity. With the new models, they can acquire shares and/or tokens/cryptocurrency that have been issued by the startup.

Entry Phases. Angel, Seed, Early to Late Stages (A-F) are the known trajectories for conventional startup investments. The new continuum has another progression lingo with it: pre-mine, genesis, initial cryptocurrency offering (ICO), listing on an exchange, or private sale of crypto-tokens directly from the company.

Business Model. A traditional startup is typically focused on developing and marketing a tangible product or service. A blockchain-based startup could have a product/service as part of what they are developing, but their stride is best hit when they are also creating a self-sustaining circular economy that is supported by their own currency or tokens, and where there is a transactional loop between earning and spending these tokens within their ecosystem.

Legal Structure. Startups typically incorporate as a Limited Liability Corporation (LLC) or any other traditional way according to the corporate laws in their given jurisdiction. In the new environment, the LLC could be creating a base open source technology/protocol, but they will run a proprietary separate business on top of it or adjacent to it (e.g. IPFS and Filecoin), or they could create a valuable ecosystem around it (e.g. Ethereum). In extreme cases, the organization is non-registered and operates as a distributed autonomous organization on the blockchain (e.g. BitNation).

Limited Partners Mix. The same traditional mix of institutional, high net worth individuals, family offices and funds of funds that typically invest in venture capital funds will be attracted to this emerging segment, only if they are progressive, innovative and forward-thinking, with the ability to allocate discretionary funds under strategic considerations pretexts. In addition, given the more relaxed crowdfunding rules that exist in several jurisdictions around the world, a new venture fund could also get a mix of participation from a publicly crowdsourced segment of investors.

Fund Currency. In addition to fiat currency, a new VC fund could also accept cryptocurrency (especially from the crowdsourced segment), because of the frictionless capabilities that exist for accepting cryptocurrencies online. However, it would be prudent to immediately convert these funds into fiat as the initial reference currency for investment vehicles, in order to avoid being caught in cryptocurrency value downturns, and to remove any perceived intent of currency speculation which is outside the mandate of a venture capital fund.

Market Approach. The best candidates for this new model will be blockchain startups that are purposely creating new business models, and not supporting existing ones. The reason is that these new business models are more fertile grounds for innovative circular economies, new ecosystems, and new value creation, which are important conditions for success.

The nature of blockchain startups is changing, and this change should be accompanied by an evolution on how they are funded.

A new VC fund with the above characteristics has the luxury of having no baggage within an existing Limited Partners Agreement (LPA) where changes may be hard fought. Instead, these elements would be baked as part of the initial LPA, while properly addressing the legal and compliance considerations.

Disclaimer: In no way does this blog post represent an offer to sell securities or an advertisement of raising a new fund. I have yet to announce anything regarding a new fund that I might raise in the future.

Committing to Daily Blogging, A Not So Easy Pledge