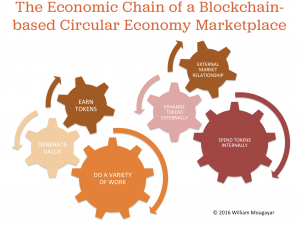 The topic of cryptocurrency-based tokens and their relationship to organizations, protocols and startups has been picking up speed, with a variety of opinions debating their merits from a legal and business model generation perspectives.

I have been thinking about the implications of cryptocurrency-based tokens for a long time, dating to when I wrote about their impact in the context of an Operational Framework for Distributed Autonomous Organizations (February 2015), and recently evolved my thoughts by explaining how they enable the creation of circular mini-economies that generate and propagate value.

Some are objecting to the crypto currency token approaches, citing the apparent legal hurdles, but that is a narrow view. Rather than second-guess the Howey Test or other securities regulations, I think we should fast forward to 1-2 years from now, when there will be more maturity and clarity around these new businesses. By that time, we will have adapted or evolved the regulation accordingly, and I foresee that this will rather become a compliance exercise more than anything else.

One of the clearest articulations on the role of tokens in the creation of decentralized protocols is from USV’s Joel Monegro, in Fat Protocols, and it includes links to additional relevant work on that topic. That view explains the shifting role of protocols vs. applications along the valuation spectrum, although I would add that not all decentralized protocols may necessarily require a crypto token at their base.

In my opinion, there is a greater theme in addition to tokens, protocols and new types of securities. The novelty is also about the work that is indirectly represented by the tokens, and its relationship to value creation via interactions between users, i.e. the Work-to-Value creation paradigm.

Tokens are just a means to an end. They are a digital derivative of the actions that users undertake, and have a direct relationship to the value their work creates, both to other users and to the network itself.

User Generated Content (UGC) has been a popular moniker denoting a key user activity for social networks pertaining to native content generation. Maybe UGC evolves to UGW,- User Generated Work, to place an emphasis on the need to have a greater variety in user participation that results in real direct value, of the monetary kind.

We could classify what tokens enable along three segments:

The general theory is: User actions generate value that earn them internal tokens that can also be spent inside the network via new transactions. 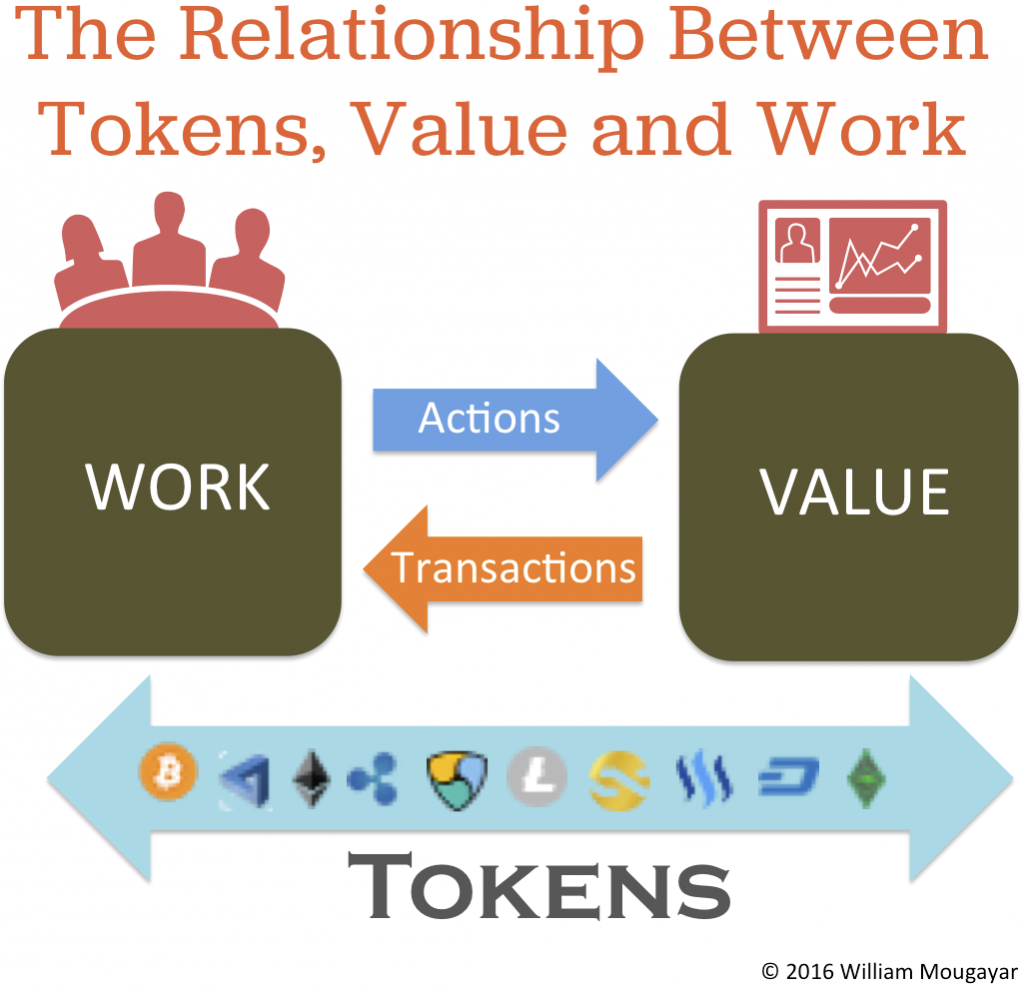 Here are my additional thoughts:

At the base of these tokenized constructs is the belief that all participants have a right to earn a part of the overall value creation they are collectively responsible for.

Let’s take Facebook. The essence of their business is to monetize our attention (by liking or sharing) and our engagement (by writing or posting), yet we are not compensated for it. If Facebook was formed as a decentralized business with a token, each user would be earning tokens for their participation. These tokens would have a redeemable and tradeable value via a liquid marketplace, internally and externally. Alas, Facebook is not doing any of that economic sharing (while we do plenty of content sharing for them), and that could become their Achilles heel in the long term, if Network Equity sharing business models turn out to be popular.

I think we are in the early stages of understanding and implementing the various models behind the tokenization of work with cryptocurrency and blockchains as the operating backbones for these models. We need to see more ambitious projects that take risks in tackling the possibilities. The most ambitious ones that I have seen to date are The DAO (which failed quickly, but with plenty of lessons), and Steemit (which has a few skeptics, but also a lot of supporters).