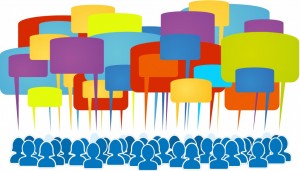 In the recent blockchain related debates pertaining to forking or block size decisions, we always hear the word “community” as a reference to the body of players who are supposed to be the stakeholders that care the most about such or such blockchain. Given that blockchains are decentralized organisms, their “community” reflects this topology by being a sprawling entity made up of eclectic and dispersed actors and players.

Why is it important to understand who the community is?

According to blockchain theory, the community is supposed to determine the future of a given blockchain via the proverbial decentralized governance magic of consensus. Consensus decision-making is at the heart of blockchains, because a plain majority can sway it one way or the other. Just like an election, more or less. The baseline of a blockchain rests on its economic soundness, and the reality is that some players hold the strings to this economic soundness more than others. Economic soundness also directly relates to blockchain security, but let’s not digress on that (yet important) tangent.

With such deciding power on the future of public blockchains, the Community is an important body, because they represent the current governance.

So I went on a research investigation to figure out the composition of a typical blockchain Community because they have been the most vocal about being who they are. What I found is that this deciding community is a subset of a larger ecosystem. The Community represents the Base Players that have had an earlier economic role in the ecosystem. They are mostly the insiders, and they have an advantage in being more in-the-know that others. Their voices are louder, and their collective actions (or inactions) can effectively determine a blockchain’s trajectory.

There is something contrarian about cryptocurrency communities. In the traditional sense, most companies will firstly gain users or customers, either as end-users or as developers. Then the body and variety of users becomes the community. In the cryptocurrency space, that sequence seems to be inverted. We start with the community of core supporters before we get to a large set of end-users. That’s ok, and perhaps a characteristic of fundamental technologies that need to garner a strong base before it flourishes.

Generically, the Base Players of a cryptocurrency “Community” are largely this group:

The larger ecosystem involves several other participants. It can be portrayed to include the Base Players, in addition to: 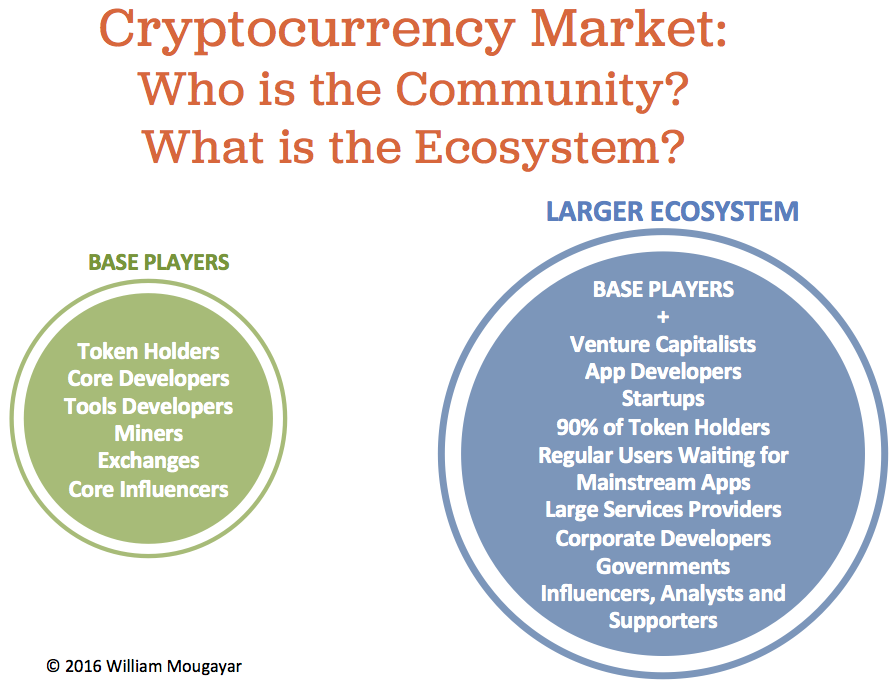 Let us take the cases of the recent Ethereum hard fork decision, and the Bitcoin block size debate epitomized by the Scaling Bitcoin conference. In both instances, the deciding community was mostly formed of the respective Base Players. But these Base Players are a relatively small group. In the Bitcoin case, the number of influential attendees to the widely publicized Scaling BItcoin process was probably under 100. And in the case of Ethereum, when the Carbonvote was tallied, only a total of 1,325 addresses voted, which is a relatively small number compared to the overall number of ETH holders, considering there is an available supply of 82 million ETH.

I hope we eventually use the word Ecosystem instead of Community, because it is more representative of a marketplace in the making. And I wished that a part of this larger ecosystem would also have a voice into the future of these public blockchains. Currently, the larger ecosystem is mostly a powerless silent majority that is watching events unfold, while being hopeful that the vocal and more powerful minority is going to lead the market in the right direction.

Eventually, any large scale public blockchain will need to reach a more balanced state where community leadership and ecosystem inclusion work together to strengthen its longevity and sustainability potential.

The Base Players are the Community today, and they are steering the boat right now, but will they in the future?