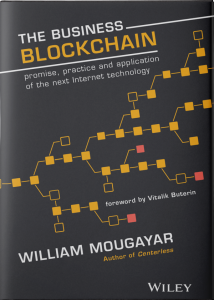 Today, May 9th 2016 marks the date that my book, The Business Blockchain is officially released on Amazon. This is the day that you would start receiving the hardcover copy if you pre-ordered it, in North America. The European release is scheduled for May 18. However, the Kindle version has been available for worldwide downloads as of April 29th, and I’ve been fulfilling the pre-orders from the Kickstarter campaign and Shopify purchases since then.

The book reviews are trickling in, and there are more coming. Here are the last 3:

Last week, at the Consensus 2016 conference in New York, the conference organizers gifted 500 copies to the attendees, and I spent 2.5 hours signing each one of them. It was exhilarating but rewarding to see the long line-up and tremendous interest around it. I spoke to each person, even for 20 seconds. Here’s a photo from that moment. 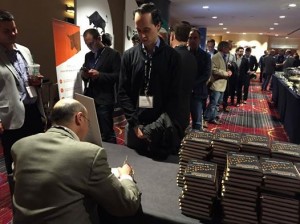 Then, last week, I woke-up Friday morning pleasantly surprised to see the book reach #1 status in 3 large categories, Banking and Finance. Definitely, the book is striking a chord with the financial services community, since my previous slideshare deck analyzing Blockchain and Financial Services has reached 188,000 views.

1. What is the Blockchain?

7. Decentralization as the Way Forward

What else can you expect in the book?

Finally, I opened a new book site where you can follow everything related to the book, reviews, events, and where I’m speaking.