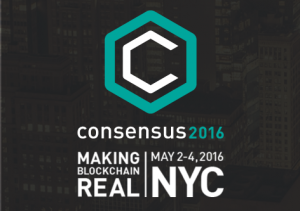 As part of today’s joint announcement with DCG/CoinDesk, I’m cancelling the Toronto Business Blockchain conference, originally planned for April 19-20, and transferring my related work to Consensus 2016, Making Blockchain Real, being held in New York, May 2-4 2016.

All ticket holders for the Business Blockchain conference will be offered a chance to transfer their attendance to Consensus 2016 at no additional costs. I will contact each person that has purchased a ticket and make specific arrangements with them.

In addition, I plan on officially launching the availability of my upcoming book, The Business Blockchain at Consensus 2016.

It made a lot of sense to merge my efforts of building a conference around use cases and blockchain practitioners into Consensus 2016 in New York. And I’m excited to be working with the CoinDesk team to help them produce the premiere event in the blockchain space.

Some of the planned sessions for the Business Track agenda will include a range of topics covering Internal Approaches for Blockchain Strategies, Identity and Personal Security, Post-Trade Financial Applications, Innovations in Insurance, Derivatives and Securities Settlements, Global Trade Finance, Best Practices with Smart Contracts, Using the Blockchain for Assets and Processes Verifications, Titles and Ownerships Applications in the Government sector, and Private Blockchain Implementations.

In addition, I will moderate a private, invite-only 90 minute banking roundtable on the final day of the Summit, during which time a special group of leading financial services executives will discuss their internal initiatives surrounding blockchain technology.

See you at Consensus 2016 in New York on May 2-4 at the Marriott Marquis. In the meantime and over the next several weeks, I’ll be writing more details about the upcoming business track sessions that we are planning.

My Girl Geeks Video Presentation on Blockchains: Why You Should Care