FinTech has certainly made a dent in the Financial Services space, while many banks continue to be oblivious to its growth, continuing to treat FinTech startups like strange beasts that need to be examined and observed, instead of followed or emulated.

In my opinion, the FinTech onslaught happened because the financial services industry did not innovate enough when the Internet came along 20 years ago. 10 years into the Internet’s commercialization, all we had was online banking and online stock trading. Therefore, FinTech companies started to emerge in the 2nd decade of the Internet in the mid-2000’s, and now they are flourishing as evidenced in these graphs in the US and Europe.

Just as pure FinTech startups kept growing and many turned their dents into beachheads or fully-fledged businesses, blockchain-based startups are starting with small dents. Some of them are attacking parts of the financial services market, some are offering solutions to existing players, while others are suggesting that a cooperative process is needed to fertilize innovation.

Large financial institutions don’t feel the impact of startups initially, because startups don’t attack existing players head-on. Rather, startups go around incumbents, and it takes a while before their market presence is visible or felt by larger players. Despite all of that, banks continue to grow and their assets continue to increase, as do their profits, but that doesn’t mean they aren’t being impacted by FinTech or BlockTech.

I have worked several hours in the past month to create this landscape of blockchain-based startups that are involved in or around the financial services industry, globally. 192 companies are in it, categorized into the same generic 3 segments that helped me understand the Internet 20 years ago: Infrastructure, Middleware and Applications.

Most of the 27 sub-categories are self-explanatory, but I’ll make some remarks on some of them: [Updated with newest chart] 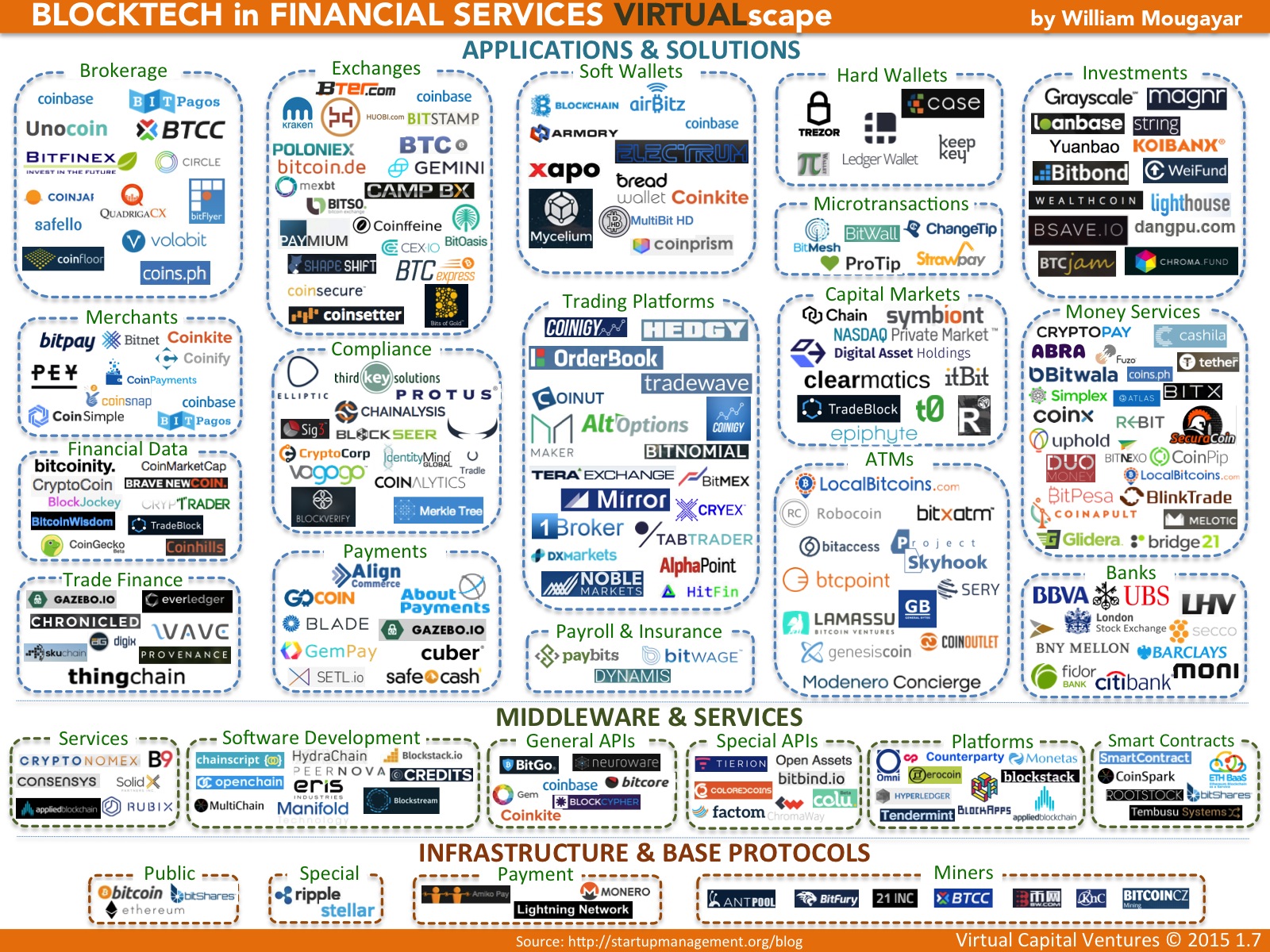 In Applications, Exchanges are differentiated from Brokerage because they typically offer more real-time currency exchange capabilities, whereas Brokerages are like a bank account and there is more latency to transaction movements. These two categories were the most difficult to pair down since there are 100+ of them worldwide. Apologies if I missed any.

When it comes to Wallets, I could have segmented them in a variety of ways, but chose to stay with a simple Soft vs. Hard wallet classification. Of course not all Soft wallets are the same. Some allow you to keep the cryptocurrency in your smartphone, whereas others use the smartphone to unlock access either via a password or cryptographic keys.

Capital Markets is also known as the quadrillion dollar opportunity, and it is where we are seeing a lot of high stakes venture capital bets and startups that are swinging for the fences wanting to solve the many facets of the clearing-to-settlement post-trade conundrum.

In the Money Services category, several players are gunning for another multi-billion opportunity as the end-game: global remittances. And Bitcoin ATMs are pushing the envelope into additional services, wanting to become more than money withdrawing machines.

The Middleware category is of interest to developers who want to build applications and innovate on top of the underlying blockchain and consensus protocols. All of the segments in this category offer various entry points including interacting with APIs, overlay technologies, integrated development environments and a choice of software languages.

Finally, the last category represents the Infrastructure and Base Protocols that are still being developed, as well as the public mining infrastructure (for Bitcoin) that validates and secures the network. This category is typically in the realm of core developers that are well versed into cryptology-based software technologies.

Note that this is a curated list. I didn’t place every company, project, experiment or white paper that are vying for this space. I have rejected a few of them, either because I didn’t feel they had significant impact or activity in financial services, or for other reasons.

Of course there are grey areas between some of these categories, but I tried to be as rational as possible, looking for common ground whenever possible. If I missed any companies that should be there, please let me know in the comments below or by visiting the Google Sheet where you can link directly to these companies. Here’s an embedded preview to the Google Sheets (Comments permissions only), and here’s the direct link:
Click here to get access to the List via Google Sheet

UPDATE: Here’s the link to a new post that followed that one, with the updated sheet and landscape.