Bitcoin, Blockchain and Cryptocurrencies: The Disconnect Between Developers and Users 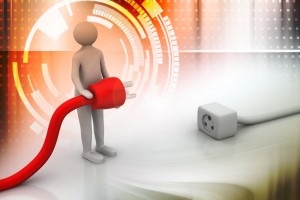 In the Bitcoin, Blockchain and Cryptocurrency space, there is a time shift disconnect between where developers and users are, in terms of understanding and adoption.

Generally, when looking at how markets grow around users, there are typically 4 successive phases of evolution: Awareness, Education, Usage, and Loyalty.

Today, developers are definitely ahead of end-users. They are already learning and using Bitcoin and Blockchain technologies, whereas the majority of end-users are still in the awareness stage. And when you look at the cryptocurrency related ecosystem that’s forming with the variety of startups, projects, protocols, platforms and services, the lion share of activity is going to developers.

It is no wonder the majority of market messages are of technical nature, as that mirrors the levels of activity around Bitcoin technologies. 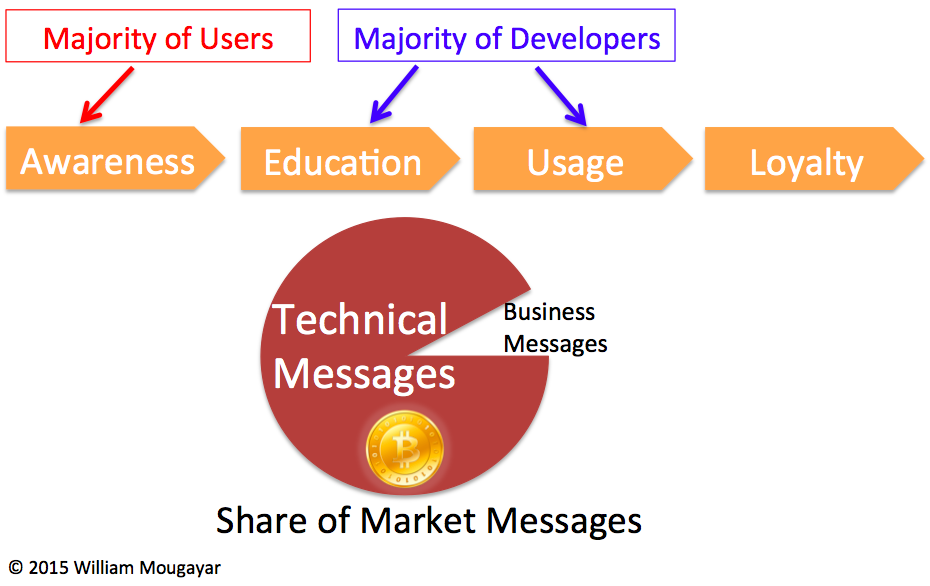 This situation is a reality check that points to the fact that engineers must try harder to explain what they are doing, because most end-users don’t like to try hard to understand something new. If it is not well explained to them, they may not see the realm of possibilities being imagined for them, and they will move on to another thing that is easier to understand.

We need more intersects of understandings between engineers and end-users: more cryptocurrency engineers that can talk to end-users (via marketers or directly), and more people that understand what the technology does.

Bitcoin and the cryptocurrency movement has a marketing problem. The complete story isn’t being told the way the market needs to hear it in order to widely adopt it.

“People don’t buy fortune cookies because they taste better than every other cookie on the shelf. They buy them for the delight they deliver at the end of a meal. Marketers spend most of their time selling the cookie, when what they should be doing is finding a way to create a better fortune. Of course your job is to bake a good cookie, the very best that you can, but you must also spend time figuring out how to tell a great story.”

For developers, Bitcoin has meaning. They have found the fortune story at the end of eating the cookie. For the general public of users, Bitcoin and cryptocurrencies don’t have a lot a meaning (yet), because they are being sold the cookie.

Engineers typically want to solve a technical problem. But if solving the technical problem doesn’t result in solving an end-user problem, users will wonder: “was that a solution looking for a problem?… because I don’t see this problem.”

The end-user mindset just wants a simple solution to work. The end-user doesn’t care who created it or who dreamt it.

Business stakeholders are also part of this equation, because they know how much problems are costing them, and they welcome the solutions that address these problems.

My advice to companies involved in the Bitcoin space is they need to be aware of the following three audiences when communicating their product or company messages to the market: developers, business stakeholders and end-users. All three segments must be addressed in the language they each understand. Business stakeholders are important because they typically have the budgets, economic and influential power to hire Bitcoin/cryptocurrency developers and marketers as needed, in order to expand or create their own solutions and opportunities.

Since developers are in the driver’s seat, they need to work with marketers and business stakeholders to better articulate and communicate what they are working on.

If there was an interesting emerging job today, it would be that of a “cryptocurrency marketer”. That person needs to be an experienced marketer that doesn’t understand anything about Bitcoin, the Blockchain or Cryptocurrencies. Incidentally, that was my starting position in the middle of 2013 when I decided to begin a deep dive into this segment.

The Crypto-Technology and Bitcoin Landscape

Disrupting by Owning Something: Can Cryptocurrency Do That?