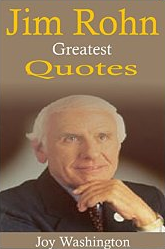 I recently came across Jim Rohn, and quickly realized that the genius behind his work originating in the 60’s, 70’s very much applies to the world of tech startups.

Emanuel James “Jim” Rohn (September 17, 1930 – December 5, 2009) was an American entrepreneur, author and motivational speaker. Over his 40+ year career, Jim wrote 17 books. I was so eager for the quick version of his wisdom, so I found this short book of 400 of his Greatest Quotes on Kindle for 99 cents. Suffice to say, it was the best 99 cents I ever spent on anything since chewing gum. I devoured the book in a few minutes, and was puzzled to find numerous quotes that had a direct relationship to a startup’s life.

Not only that, I immediately sent the e-book as an e-gift to about ten entrepreneurs I’m currently working with, or invested in their companies, with a short note: “Everything you need to know about success is in this book.” That was the best $10 I spent. And as an experiment, I asked them if they would share with me which were the top 2 quotes that stuck with them the most, in terms of actionability.

So, I’ve chosen 34 quotes from the 400 in that book, to illustrate not only the fact that Jim Rohn was probably the original startup mentor, but to show that we don’t have to re-invent everything in the world of startup management. Starting, funding, growing, and scaling a startup requires a lot of common sense and wisdom that is already available for the picking. If you learn and believe in some basic business and life philosophies, you can use your common sense to automatically apply them, and you will often find the answers yourself.

Here are the key quotes that I liked, and a quick comment on the startup analogy.

“The difficulties you meet will resolve themselves as you advance. Proceed, and light will dawn and shine with increasing clearness on your path.” – Jim Rohn
If this doesn’t sound like Growth Hacking 101, I’m not sure what does. This is exactly what growth metrics and startup analytics enable you to find out. Good thing we can have that in real-time today, and in digital form. It used to all be on paper before.

“Ideas are information taking shape.” – Jim Rohn
Yes, the genesis of a startup is always that magical idea. But ideas are only the beginning. You need to pad these ideas, and execute on them.

“In any situation you can think of, impatience is a source of weakness and fear, while patience represents substance and strength.” – Jim Rohn
It takes a while to build a viable company. Be confident, and keep strengthening your success base, one layer at a time.

“It is hard to keep that which has not been obtained through personal development.” – Jim Rohn
An entrepreneur who doesn’t grow, develop and mature along their startup’s evolution eventually becomes a liability to its growth.

“Good service leads to multiple sales. If you take good care of your customers, they will open doors you could never open by yourself.” – Jim Rohn
If this isn’t Customer Success 101, or Customer Advocacy basics, I’m not sure there would be a simpler way to say that satisfied customers will refer new customers back to you.

“Practice is just as valuable as a sale. The sale will make you a living; the skill will make you a fortune.” – Jim Rohn
Our modern interpretation is “nail it before you scale it.”. Once you figure out that skill, you can transfer it to others and scale that way.

“To succeed in sales, simply talk to lots of people every day. And here’s what’s exciting – there are lots of people!” – Jim Rohn
Another basic rule of sales is to have a large funnel.

“Even if you are new in sales, you can make up in numbers what you lack in skills.” – Jim Rohn
Sales numbers speak. If you hit your numbers, nobody will say you were a bad salesperson.

“Money is usually attracted, not pursued.” – Jim Rohn
A similar adage is “bought, not sold”. It applies two ways: 1) Ideally, let VCs approach you, instead of you going after them, b) Strive for market pull so that customers and users come to you, and you’re not pushing yourself on them.

“Part of your heritage in this society is the opportunity to become financially independent.” – Jim Rohn
Financial independence means you may not require further venture money to fund your growth.

“I remember saying to my mentor, “If I had more money, I would have a better plan.” He quickly responded, “I would suggest that if you had a better plan, you would have more money.” You see, it’s not the amount that counts; it’s the plan that counts.” – Jim Rohn
You need to have a plan or strategy, and executing on that will lead you to success.

“Take advantage of every opportunity to practice your communication skills so that when important occasions arise, you will have the gift, the style, the sharpness, the clarity, and the emotions to affect other people.” – Jim Rohn
If you cannot communicate with clarity, you cannot touch people or the market around you. It starts with your venture funding pitch, passes by your market and customers, and includes your employees.

“Accuracy builds credibility.” – Jim Rohn
Be authentic and truthful, with your numbers and your statements.

“Their dreams were stronger than the obstacles in their way.” – Jim Rohn
What a powerful statement. Just think about it during moments of difficulty.

“Never attack a problem without also presenting a solution.” – Jim Rohn
Beware of employees that complain without suggesting how to solve an issue.

“Good people are found, not changed. Recently, I read a headline that said, “We don’t teach our people to be nice. We simply hire nice people.” Wow! What a clever shortcut.” – Jim RohnThat’s a great human resources practice: hire people that are smart, work hard and are nice people. That’s it. The rest will take care of itself.

“He said, Mr Rohn, if you truly wish to be successful, you’ve got to associate with the right people.” – Jim Rohn
It’s all about people. And that applies to your employees most importantly.

“We don’t get paid for the hour; we get paid for the value we bring to the hour.” – Jim Rohn
Especially so true for remote teams. This is exactly how Matt Mullenweg, CEO of WordPress/Automattic describes his philosophy for running a decentralized organization where his employees are in several countries around the world.

“The challenge of leadership is to be strong, but not rude; be kind, but not weak; be bold, but not bully; be thoughtful, but not lazy; be humble, but not timid; be proud, but not arrogant; have humor, but without folly.” – Jim Rohn
Easier said than done, but Jim Rohn has just summed-up the key management leadership qualities.

“Leadership is the challenge to be something more than average.” – Jim Rohn
Read it as “market leadership” too. Unicorns, anyone? The percentage of startups that succeed, change markets and inspire others is very small. Be that one.

“The real problem is usually two or three questions deep. If you want to go after someone’s problem, be aware that most people aren’t going to reveal what the real problem is after the first question.” – Jim Rohn
Jim Rohn was probably the originator of the rule of 3 Why’s? Ask Why 3 times, and you typically get to the bottom of the answer.

“Failure is not a single, cataclysmic event. You don’t fail overnight. Instead, failure is a few errors in judgement, repeated every day.” – Jim Rohn
So true. Failure doesn’t happen overnight, just as success doesn’t either. Get regular check-ups with advisors and board members, so you don’t accumulate error debt.

“You cannot make progress without making decisions.” – Jim Rohn
Startups operate in dog years. It’s a fast-paced environment. The more decisions you make, the more you make great ones.

“When people asked Socrates, ‘What is wisdom?’ he always gave the same answer: ‘I don’t know’. In fact, Socrates never claimed to know much of anything except how to ask questions. And by asking questions, he would prove to other people that they didn’t know what they thought they knew.” – Jim Rohn
I haven’t met a successful entrepreneur that wasn’t curious and obsessed about their curiosity.

“The enemies inside us: Indifference, Indecision, Doubt, Worry, and Over-caution.” – Jim Rohn
A startup has to break new ground every day, decisively. If you prefer being cautious, get a corporate job.

“Some things you have to do every day. Eating seven apples on Saturday night instead of one a day just isn’t going to get the job done.” – Jim Rohn
Ah, the old crunch time. A startup is not a university exam where you can have a sleepless night and still get an A.

“How do you deserve a fortune? Render fortunes of service.” – Jim Rohn
If your startup doesn’t deliver value to the market, there is no way you will have a valuable startup.

“The philosophy of the rich versus the poor is this: The rich invest their money and spend what is left; the poor spend their money and invest what is left.” – Jim Rohn
I like to see startups apply this philosophy to budget allocation after receiving funding. I like them to think that every dollar spent is an investment they are making, instead of an expense they are incurring. This applies to salary levels as well. Before paying more just because you can afford to, ask yourself whether you are always getting back more than what you are paying for.

“Earn as much money as you possibly can and as quickly as you can. The sooner you get money out of the way, the sooner you will be able to get to the rest of your problems in style.” – Jim Rohn
Revenues! If you have revenues, you are less dependent on outside venture capital to survive, but you can ask for it to grow, instead.

From now on, I’m going to take a more philosophical and indirect approach to coaching/mentoring startups and entrepreneurs. Truth is, as Andy Weissman pointed out, there is a Chaos Theory of Startups. In the same way that every venture capital deal is different, every startup will be different, and that chaos theory is so very true at the beginning, but as the company grows, some of that chaos turns into patterns, and it gets a little easier to manage with less ambiguity.

At the end of the day, it is the entrepreneur/startup who has to score every goal, not the coach. As an advisor/investor, all you can do is help to make them self-aware, and it will pay dividends as they’ll realize how to improve themselves and solve the challenges they will face.

Post Series A Life: Reflecting on Our First Board Meeting and What It’s Like Working with Brad

6 Ways To Get The Most And Best From Your Board