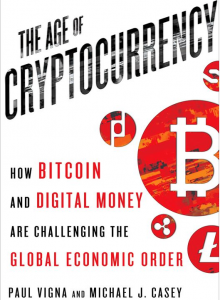 If there was a book I wished had existed when I first became involved in Bitcoin in 2013, The Age of Cryptocurrency would be the one. So, to all my friends who are still skeptical about cryptocurrency, or want to better understand it, this book was written for you. It will save you hours of piece-meal catch-up reading about this topic from a variety of sources or blogs.

The authors, Paul Vigna and Michael Casey are accomplished reporters and writers for the Wall Street Journal’s Money Beat [Michael’s bio, Paul’s WSJ page]. No doubt, the book is extremely well written, and easy to understand. In a nutshell, it narrates the chronology of Bitcoin’s evolution with impeccable precision. It is free of hype, while not being shy in pinning the important role that cryptocurrencies will play in our future.

In eleven chapters, the book cleverly combines extraordinary stories about Bitcoin’s usage around the world, while weaving more serious explanations of the key concepts behind the cryptocurrency revolution and all the pieces that relate to it.

The book starts with a sweeping account of the origins and relationships between money and governments from the Babylonian times, to the Chinese emperors, into Europe’s medieval rulers, to Bretton Woods, and the watershed moment when Nixon un-pegged the US dollar from gold, and beyond. That part puts an insightful context about the global evolution of money in our society and economy.

The book’s second chapter, rightfully called “genesis”, is framed by a key statement that Satoshi Nakamoto once made: “What is needed is an electronic payment system based on cryptographic proof instead of trust.” Hence, you’ll understand the omnipresent importance of the “trust” theme that dominates today’s bitcoin applications. The “genesis block” in cryptocurrency speak marks the launch of a cryptocurrency’s blockchain, its most critical beginnings. I loved how they recount the story of Satoshi Nakamoto, by unravelling it with a suspense-like cadence. If you are patient enough to understand this chapter, you will understand all of the basic foundations of cryptocurrency and what it has sparked. And with great attention to detail, the authors proceed to add the important pieces of context related to the evolution of digital currencies / e-cash in the days following the mid 90’s Internet revolution, to the birth of the bitcoin “community” of early actors and players that gave it wings, sails and wind.

“The blockchain, the all-important ledger that functions as bitcoins central nervous system, was Nakamoto’s signature achievement. While technical in nature, it reflected important insights about the psychology of money and community, and what’s needed to create rules that make individuals act in the interest of the group.” There are two subtle, but key concepts to remember: psychology of money, and collective impact of user actions.

I liked how seemingly obfuse concepts are explained via simple analogies. For example, “mining is like bookkeeping”, or the decentralized ledger is a “stand-in for the middlemen.”

Then, there’s another chapter covering the “2.0” movement, which depicts the realm of more advanced applications of the blockchain, although I felt that that part barely scratched the surface of possibilities.

Other chapters are devoted to understand Mining, how Bitcoin moved away from its original “crypto-anarchists” supporters, how Bitcoin will help the Unbanked of the world, and insights into how the Bitcoin “core developers” are doing their innovative work to continue evolving its capabilities.

The final chapter gives an outlook about how the world of cryptocurrencies can impact the global economy, especially how it will affect the financial systems. In all intellectual fairness, I thought that was the weakest chapter, but the book suddenly rebounds with an excellent “Conclusion” chapter that turns into a philosophical pondering about the existential nature of Bitcoin, and the tug of war between the libertarians and crypto-anarchists who gave it its early life, and the latter groups that are now destined to lead it into growth as it enters adolescence and adult life: the VCs, entrepreneurs, and society. The following paragraph frames that part:

“One way to think about bitcoin is as a movement, yet a movement that’s made of different, sometimes competing parts. The crypto-anarchists and libertarian techies built bitcoin up and made the intellectual case for it, and they will continue to play a role in furthering its development as a currency and a cause. But the VCs and entrepreneurs who are taking it out of the dark Web and putting it in front of the masses will also play a critical role in its development. This dichotomy reflects that while bitcoin’s expansion is at least partly based on a political response to the financial crisis, it is also founded on technology, which by definition separates it from ideology. That makes it very different from any other political movement and creates crosscurrents that shape its development in unpredictable ways.”

I had been looking to find a book on cryptocurrency that wasn’t too basic, nor technical, and I was pleased to find it. The Age of Cryptocurrency:How Bitcoin and Digital Money Are Challenging the Global Economic Order covers all the ground you need, how it all works, the key players, issues, and Bitcoin’s future.

If you are part of the 99% who hasn’t fully grasped the meaning, importance and implications of Bitcoin and cryptocurrencies, this is definitely the first book you ought to lay your eyes on.

[Disclosure: I do not know the authors, nor have I ever contacted them.]