Some of my thoughts are in the below Tweetstorm, Is Bitcoin Really TCP/IP. But we need to realize (and accept) that the “One Currency-One Blockchain” paradigm is being challenged.

There are five variations on Crypto Technology Platforms that are emerging, as depicted in the following diagram: 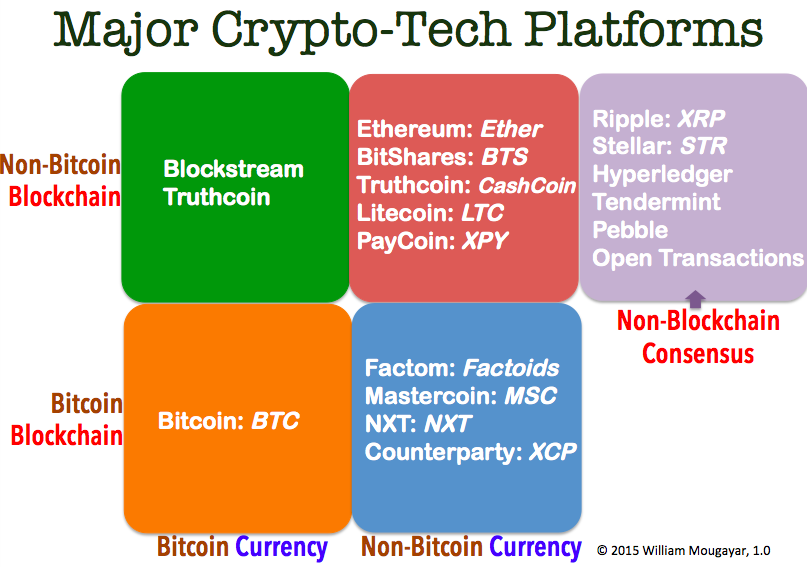 And to complicate things further, some of the platforms like Truthcoin have two currencies: a native currency and Bitcoin. Others like Ethereum allow you to create your own cryptocurrency.

I’m going to ask some questions, without totally answering them, but you will see my bias towards Blockchain Apps as the ultimate Network Effects leveler, and not Bitcoin users as we see them today.

Is Cryptocurrency Fuel or Toll?

Keep in mind that today, 99% of the revenues in the Bitcoin network are mining related. But going forward, that ratio is expected to shift towards transactions.

Although a cryptocurrency needs users, I think the important thing for a blockchain will be developers. They will ultimately be the ones creating these Apps.

Eventually, we will see a degree of interoperability between blockchains, and we will see more inter-liquidity between Cryptocurrencies. Of course if Apps are on the same blockchain, it will be easier for them to interoperate, and there is some gain in network effects, but that may not be the dominant factor if blockchains interoperate nicely. And as for cryptocurrency liquidity, that will be achieved fairly soon via exchanges, allowing you to easily convert from one currency to another.

So, back to the main question:

Which Network Effects are more Important: Cryptocurrency or Blockchain?