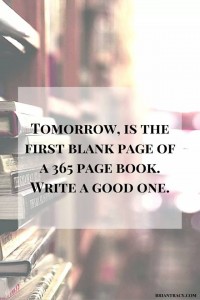 So, I’m putting a philosophical hat on. I saw this image on my Facebook stream yesterday, and it resonated. Let this New Year bring the best for you.

Here’s an eclectic collection of my thoughts, some of which have been concocted over the past year.

1. If life gives you lemons, don’t make lemonade. Think outside the box. Make limoncello. Make a lemon cake. Put lemons in a foccacia bread. Create something new with lemons.

2. Meditation is the exercise of the mind. Don’t overlook your brain’s needs.

4. To be trusted is a greater compliment than being liked. (adapted from George MacDonald)

5. You need to take something out in order to add something new. Life is full as it is. Otherwise, jamming new on top of old is just jamming stuff. Ask yourself what you will stop doing, so you can make room for something new or essential that you “need” to start doing.

6. Every thing has its place, and every place has its thing.

7. What money brings is a clear mind in decision making and a freedom to act. Of course you can trick yourself and act freely with a clear mind.

8. If you have an important legacy, take care of it forever. If someone tramples on it, who will be there to defend it?

10. If you get lots of experience fast, it doesn’t make you wiser. You need time to process what you think you learned.

11. The best job to have is one that you initiate. Sometimes it doesn’t pay more, but it earns you more.

12. Finding your “system”. It’s your cadence, your rhythm, your rituals and beliefs, what you will do and not do. Every successful person has their own secret “system”. Find your own. It’s part of self-awareness. Find someone you like and ask them about their “system”.

14. Why does typing the word “blockchain” always autocorrects to “block chain”? When that stops happening, then we’ll know Bitcoin has arrived into the mainstream. Imagine if the word Internet auto-corrected as “In the net” each time you typed it. It would be very annoying. I’m typing blockchain 30 times per day.

15. Beware of excessive central powers. They will be a dying breed.

16. Nothing is stronger than the powers of a network whose network effects have come.

18. Why isn’t the starting point for everything something that’s “peer-to-peer” and not a central thing? If we don’t need an intermediary, then let’s not have one. Step 1: Question every intermediary’s role and value.

19. Even when entrepreneurs and startups lose or don’t win, others benefit by learning and observing. Key is to keep losses small and wins big.

20. Plans are to big companies what agility and speed are to startups, which is how they compensate for zig-zagging into their future.

21. Just about everything to be learned is on a blog or website. There is so much transparency. Experts & experienced people are spilling their guts revealing secrets, wisdom, lessons, and how to’s. If you don’t follow at least 3 blogs you learn from, daily, you aren’t advancing your knowledge, and others are learning while you’re not.

22. Don’t reason away your vision.

23. If you choose your work life in a particular domain, and don’t intent on becoming an expert or leader in it, I feel sorry for you.

24. You don’t learn entrepreneurship by sitting in a classroom. Just like you can’t score if you’re sitting on the bench. You’ve to get on the court & play ball.

25. The most successful startups become brands. If you think of companies that emerged and became successful, it’s because they got inside our minds. If you occupy a place in the mind of your market, you make it more difficult for your competitor to displace you.

27. Doing is easier than un-doing. When was the last time you un-learned something?

28. I prefer the practice of relativity to its Einstein’s theory. At least I can understand it via cause and effect, an underrated symbiosis.

29. I don’t like to predict the future based on the past. That leaves no room for innovation, surprises and the unexpected.

30. Sometimes a simple solution is better than a better solution.

31. The difference between a VC and an entrepreneur? A VC makes several small bets. An entrepreneur makes one big bet.

32. As an investor, keep focused on doing what’s in the best interest of the entrepreneur. The rest will take care of itself.

33. A good VC knows big ideas from smaller ones. For entrepreneurs, all their ideas are big.

34. Get to know the real person behind the entrepreneur. People reveal themselves over time.

35. Why isn’t there a “Like All” on Facebook? Time-saving feature. Really, all your friends are saying nice things. Even better, all posts should come Liked by default, and you can Unlike if needed. Less work.

36. The best technology, if not well marketed will not win.

37. The decentralization of web content has resulted in a fragmentation of knowledge, yielding bite-sized everything (the opposite of super-sized). That puts more pressure on us to reconstruct what is important, to make it useful.

38. Want a powerful personal CRM? Just reverse your social network by importing people that follow you into a CRM. Twitter, Facebook or LinkedIn should give us a demographic cut on our followers. Tell me who is following you, and I’ll tell you who you are.

On People and Relationships

39. If you want to change someone’s mind, ask them questions.

40. If something looks distorted, look at the root.

41. Most relationships start off great. It’s how they evolve that matters.

42. Being well networked is more important than being socially savvy online. Online social networking is a means to an end. Move your relationships to the real world, and you will quadruple the benefits of online friendships.

43. We are all born equal, and if given equal opportunities, we can excel at achieving high standards. Problem is many governments around the world are screwing the citizens who “elected” them, or in some cases are tolerating them.

44. It is not fair that corrupt and inept governments have so much influence on the lives of the people they are supposed to serve. If you haven’t lived in a non-developed country, you may not appreciate the full extent of this comment.

45. We are all futurists. Everyone thinks about the future in their own way. (adapted from Alvin Toffler)

46. There is no reason why all countries in the world shouldn’t become “developed” and let their citizens reach higher standards quickly. The world is an open book. Economic prosperity, health care, getting water, growing food products, creating jobs, applying technology, getting educated- all of that is not rocket science. Just Google it.