If you have been in the technology business since the mid to late 90’s, the Internet bubble was probably the most memorable bad moment that happened in and around 2000/2001.

Recently, talk about a resurgent “tech bubble” comes back intermittently, with the proverbial question being: “are we in a tech bubble”?

My opinion today is that we don’t need to fear the repercussions of a tech bubble again, at least not in the way of its previous devastating effects.

Let’s first understand the causal factors of the previous bubble. A brief history and post-mortem point to what happened:

So, in 2000, there were plenty of excesses and bad practices to go around, from venture capitalists, entrepreneurs, public markets and consumers alike. Today, the picture is very different, and we are not even close to a bubble.

Why do I think so? It’s a combination of two factors. One, the tech ecosystem is a lot more resilient than in 2000. Two, we’re not seeing the same bad symptoms of 1999.

I’ve previously written about the resiliency of the tech startup ecosystem (or we should say Antifragility), in the context of reviewing the book Antifragile by Nassim Taleb in a 2013 post, Good News, The Tech Startup Ecosystem is Antifragile.

1) We’re more resilient about taking losses. Not only is it cheaper to start a company; but if you fail, you fall from lower heights, so it won’t hurt as much. “Small” failures are not harmful to the system as a whole. They are only harmful to the small teams being affected.

2) We know a lot more about running Internet companies. Today, there are many more lessons from mature and successful Internet companies. We have learned a lot about how to succeed as a startup or Internet company. Failures and successes have made everybody smarter. That body of knowledge is benefiting the whole, and it keeps getting better. We are producing better startups, and better entrepreneurs.

3) Entrepreneurs are better networked. Social networks and social media had their effects on the entire tech community, and this is a good thing. Business accelerates when its network participants are connected without barriers or distance challenges.

4) There is a better quality of accelerators. Techstars, Y Combinator and other top tier accelerators didn’t exist then, at least not at the quality and caliber levels that we have today.

5) Ecosystems around the world are becoming viable and vibrant on their own turf. New York, Boulder-Denver, Austin, Seattle, Berlin, London, Waterloo-Toronto, just to name a few are strong stand-alone ecosystems, with their own full set of actors.

A lot is different today, when compared to 1999. It is important to understand these differences and their implications.

1) The tech startup ecosystem is more international. Unlike in 1999, today, risks are spread outside of Silicon Valley. The likelihood of a domino effect of failures that is concentrated in one area is unlikely.

2) Investors are wiser and tighter with their funding. Despite the recent flurry in new fund announcements, we still haven’t reached the capital commitments levels of 2000 by any stretch. See the following NVCA historical chart, from their 2014 Annual Yearbook report: 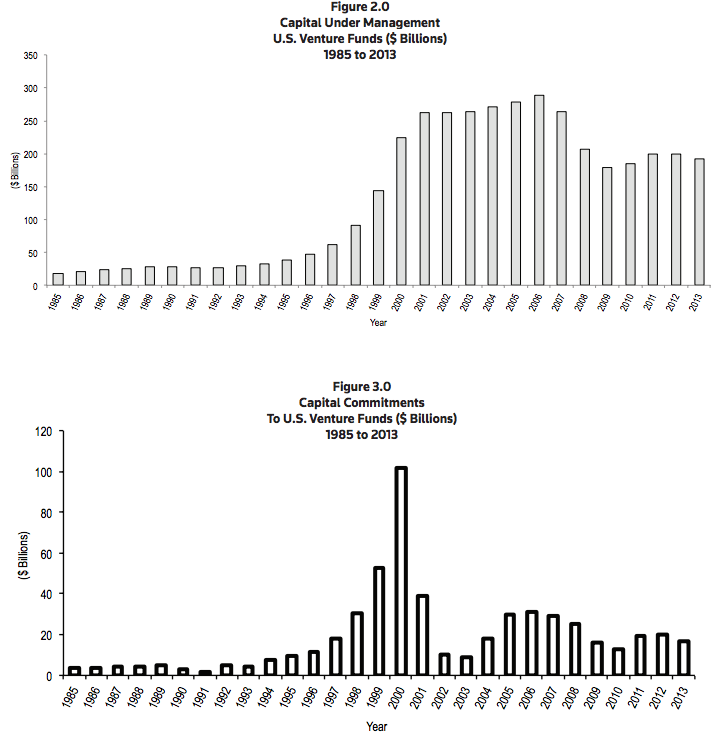 3) Going public isn’t the main goal. Yes, tech IPOs are returning, but they are returning timidly, and with the lessons of 1999 still engraved on everyone’s minds, i.e. these companies are going public with sustainable revenues and/or profits. In parallel, a number of healthy exits are happening to counter-balance the need for an IPO.

4) Crowdfunding is a release valve for demand. A lot more startups can get funded via non-traditional ways, thanks to open marketplaces like AngelList, CircleUp and others. Independent investors and agile angel investors are offering another sifting mechanism for helping startups succeed.

How to spot the next bubble?

If we were to see the following symptoms re-appear, there would be cause for concern:

What about overvaluations? I think that’s OK, because they equalize over the long term, most typically at the subsequent round. If a company got funded at a high price, two things can happen. Either they live up to their expectations, and they earn that valuation over time, or they don’t deliver and they take a haircut at the next round, if there is one. Either way, things end-up by equalizing.

What if the new VC funds end-up producing lower returns? Well, I think that would hurt these VCs (and their LPs) more than entrepreneurs, but as long as the top VCs continue to perform well, LPs will keep returning for them.

In closing, I’m not going to categorically say there will “never ever” be a bubble in the future. But I will say at least, that the signs aren’t apparent, now. If a bubble were to happen, it will likely be from a new set of causes that aren’t that visible or obvious today, or it could be from a black swan type of event.

At least for now, we shouldn’t fear another Tech Bubble, but rather let’s embrace the great times we’re in, with the wisdom of the past, and the optimism of the future.