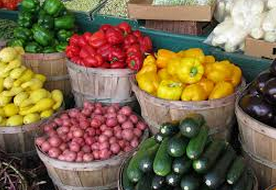 I’ve been listening to a lot of product and company pitches in the past few weeks, as part of building my funnel of startups to potentially invest in. And I noticed two VC role analogies: 1) the VC as an Analyst, and 2) the VC as someone at a farmer’s market.

The VC as an Analyst

I was a technology analyst at Aberdeen Group during a six month-stint in 2005. Part of the sauce process was to take a lot of briefings from vendors, and to talk to an equal number of customers that were using their products or having that need. The end result gave us unique insights and a more complete picture of what was going on in that sector. Then we were able to write the “analyst report” as brilliant synthesis of what was out there, backed with quantitative data and qualitative observations. It made us look smart and in the know, but that’s really how that game was played. Another part of that job was to then talk to customers, and because you had heard all the vendor pitches, you were able to suggest some advice for them.

The VC-Entrepreneur relationship often starts with a pitch, a deck, a slide, a series of emails, or a discussion. And after hearing the story, you start to slot it in your mind somewhere. Your analytical skills come into play, and since you have heard a number of similar or related pitches, the picture gets clearer and clearer. Then you add your pattern matching to this, and you start to hone in on the deals that you like to continue pursuing, and ones that you have to pass on. But in essence, you are being an analyst for your own purposes.

Some VCs blog about that and that’s a good thing. Many of Tomasz Tunguz’s posts are very much like analyst posts, and if you didn’t know he was a VC, you might think he was an industry analyst.

Another part of the VC’s job is to cherry pick the deals they want to get into it. And that’s no different than going from one stand to another at a Farmer’s market. But you don’t want to make your choices too early before you have seen all the available stands. Everything looks great initially, but there is always something better around the corner, and if you’ve already purchased the first apples you saw, you might see a better apple stand a few minutes later, and you might regret that quick decision.

That was basically Chef George Zakarian’s advice in this article Don’t Buy Anything For The First Half Hour at a Farmer’s Market:

First things first: Don’t buy anything for the first half-hour. See what you see. Ask for samples of everything. Then sit down for a minute and have a coffee and write down what you’re going to buy. Don’t be manic — everybody buys way too much. They get excited, they buy this and then say: “Why did I do that? This chocolate looks better, but I just bought this chocolate!”

That said, it doesn’t mean that everything you pick has to be perfect. Sometimes you pick tomatoes that don’t look great, but they are ripe and fragrant, and that’s what exactly you needed for your sauce recipe, but sometimes you want the look and shape to be perfect too, because you’re presenting the produce a different way, and it has to stand on its own. The analogy is that VCs continuously see startups that aren’t “perfect”, but that have a lot of good parts in them, and they choose to fund them and work with them, in order to help making them better.

As an entrepreneur, you want to do your homework and make it easy for the VC to understand where you fit in the space or trend you’re playing in. As an analyst, pitches that were clearer than others were more memorable, and sometimes material from them was used in the analyst report. Be the pitch and team that is memorable by being original and authentic about what you are doing. A good VC has probably seen a lot of pitches and teams like yours, so they can see through the cracks if you try to hide them conspicuously.

Recognize that VCs are going to compare you to others in your space or outside of it. Just like you might be shopping for VCs, they are shopping for you. Decisions aren’t often made after the first stand stop. The passage of time will reveal a lot about people in the same way that some produce ripen to perfection, and others don’t.