By now, we know Bitcoin as that stubborn and resilient currency system that has survived the collapse of one of its major exchanges- the equivalent of a major bank folding and losing its clients deposits, the mysterious suicide of another exchange’s CEO, a controversial discovery of its inventor, continuous media attacks nipping at its weaknesses, and a possible loss of confidence by the general public.

Regardless of these events; for Bitcoin to succeed, we need to stay focused on Bitcoin’s first promise: a better, super-efficient money system.

At the heart of a money system, lies its oxygen: the movement of money, enabled by payments. That’s why we need to implement and use payments really well via the emerging Bitcoin infrastructure, both within pure Bitcoin solutions, and with Bitcoin options inside existing systems.

The first wave of early consumer adopters is using Bitcoin via one of the following mechanisms: a wallet (in all its forms- software or hardware), a dedicated cryptocard, a hybrid card that accepts fiat and cryptocurrency, or via specialized ATMs that dispense Bitcoins.

But for Bitcoin to gain mainstream acceptance, these “bitcoin-centric” solutions aren’t enough to entice the average consumer to bite on it. The average consumer would like to see Bitcoin in the existing nooks and crannies of e-commerce, merchants, businesses, e-payment options, and eventually their trusted banks and credit card companies. 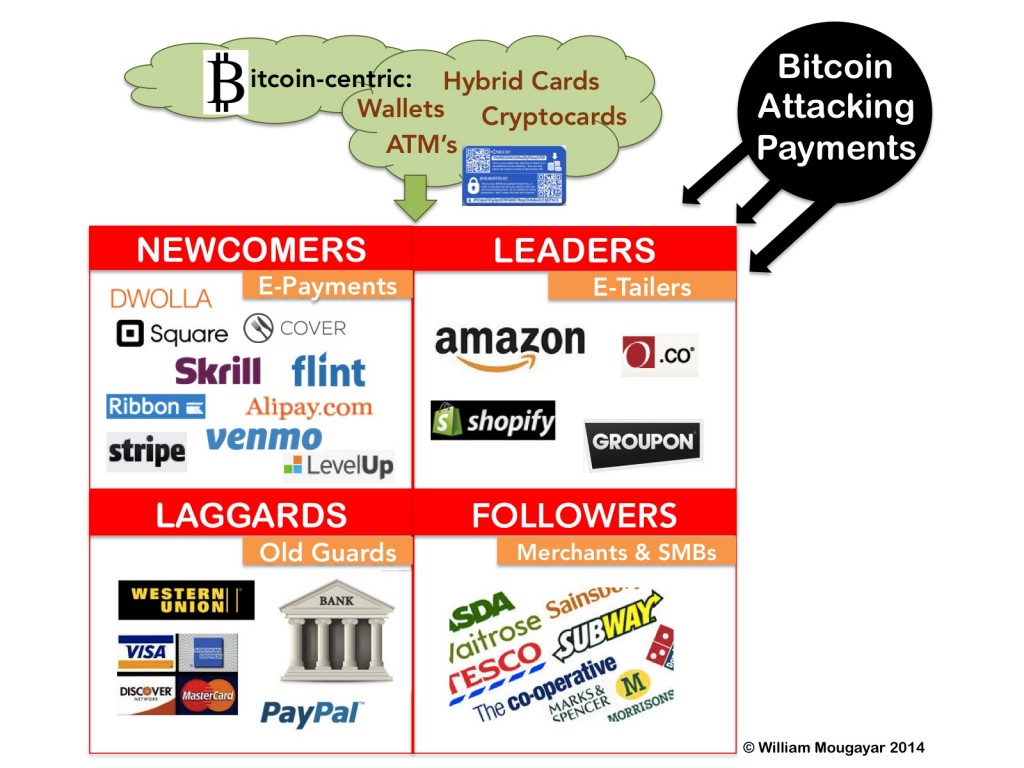 Bitcoin is supposed to be the Internet of money. Therefore, it’s natural that the Internet is where it thrives first. As more e-commerce players and infrastructure providers enable Bitcoin payments every time a customer touches their electronic stores, Bitcoin will become more utilized and accepted as an alternative method of payment. Although companies like SaaS provider Shopify and e-tailer Overstock are accepting Bitcoins, not all e-commerce retailers are on-board yet, especially not the major ones.

Retail Merchants and SMBs as Followers

Retailers are starting to follow the e-commerce providers. Eventually, every Point-of-Sale terminal, every cash register, and every merchant will accept Bitcoin as one of the many forms of payment options. But this isn’t the case yet. An estimated 50,000 merchants and e-commerce retailers accept Bitcoins today, but that’s barely the tip of the iceberg.

This segment is comprised of the “old guard”, i.e. established players that have been around for at least 10 years. These players own the large share of where most of our transaction activities are going today, perhaps 95% of that activity. They have the most to lose from Bitcoin, but they also have the most to gain if Bitcoin became widely adopted.

An important sub-segment held by the old guard is the global remittances market, valued at over $440 billion annual volume. According to the World Bank, a 5% reduction in the cost of sending this money would provide recipients an additional $16 billion. (let’s remember that Bitcoin transfers are really really cheap, if not free)

Another sub-segment is business related transfers, like wiring money to fund a company or pay for a large transaction. Although not as price sensitive as the consumer segment, that system is wrought with inefficiencies, complications and delays.

If Bitcoin started to eat at those two segments, the end-result would be a huge saving to business and society.

This segment includes newcomers in the payment space, usually 5-7 years into it. Their common characteristics include a modern infrastructure, heavy reliance on electronic communications, mobile usage, and the fact that they originally came along to disrupt the old guards, before the advent of Bitcoin. Although they have been doing a good job at gaining market share against these old guards, Bitcoin arrived on their scene like a curve ball, and is as foreign to them as it is to the old guard.

These newcomers are a wild card, in my opinion. If they adopt Bitcoin en masse, they could swing a big momentum in favor of Bitcoin adoption.

We must succeed at Bitcoin payments, or we will have an unfinished promise, especially that several distractions are looming around it: talk of regulation, some countries banning it or being hostile to it, 150+ alternative coins vying to replicate Bitcoin’s success, price volatility, future uncertainty, trust issues, misunderstandings, and uninformed pundits with loud voices.

The competition against Bitcoin and the barriers it must surmount are not to be under-estimated. They fall within the traditional supply-demand conundrum. On one side, we need to educate users about its usefulness, and make it ease for them to use, and on the other side, merchants and payment providers need to give consumers lots of choices for spending, buying or transacting with Bitcoin.

The irony of this evolution is augmented by the fact that the banks and credit card companies hold a lot of experience in payments and money, but they are largely watching the Bitcoin crowds stumble their way through it, and they aren’t helping because they are the ones being disrupted.

Let’s learn to walk before running (we’re still crawling). The more the average consumer knows how to easily buy, store and spend Bitcoins, the more they’ll be able to participate in more advanced variations of the cryptocurrency ecosystem.

Let the average consumer get comfortable with Bitcoin.

The battleground is awareness, usage, engagement, retention, and daily activity. These are metrics that any startup is familiar with.

The Power of the Bitcoin Address