Bitcoin is messy. Let’s fix it.

“This is not just money for the Internet. This is a new Internet of money.”
— Andreas Antonopoulos, Bitcoin expert

Bitcoin is the first large-scale, peer-to-peer, crypto-currency platform experiment that has a real chance to making a significant impact on how we use money around the world. To begin to understand it, you need to think of it as an open “money platform”, and not just a new type of currency. Once you detach its currency-related speculative and volatile characteristics; within its own ecosystem, Bitcoin attacks the traditional money supply chains and breaks down traditional barriers and conventional practices. That is why it is feared by some, misunderstood by many, and embraced by the early few. But its long-term success is not assured. It must be guided, and it must be focused.

I’ve recently become a huge proponent of Bitcoin, as a result of my own analysis, not of anyone else’s. Earlier, I wasn’t against it. I was neutral, because I couldn’t understand it at a level where I could form a defensible opinion without pandering to other viewpoints. I kept asking questions, and kept receiving fewer answers than I was hoping for, even from those who had invested in it. But that didn’t deter my optimism for Bitcoin’s future.

Then I reached the conclusion that one of the issues that is currently hurting Bitcoin’s prospects was a lack of clarity around its future, in the eyes of users. Furthermore, the challenges and barriers surrounding Bitcoin’s evolution were not being addressed systematically. We can’t just say: “let the market develop”. A mess, with the passage of time and some experimentation doesn’t always result in a less messy situation. Sometimes, things get worse if a path isn’t given some guidance.

I’m suggesting that it’s time to put some order and simplicity in the mind of people about what Bitcoin is, what it’s not, what it could be, and what needs to happen around it. That order needs to be simple, and without obfuscations of jargon that is incomprehensible to the average person. Let’s not forget that the future of Bitcoin will depend on the average person’s understanding of it, which will precede their usage of it. No one will use something they don’t comprehend, at least up to a minimum level of understanding.

Bitcoin today is a little like the Internet in its early days, around 1994. It’s equally full of excitement and skepticism. But the Internet turned out to be a wonderful thing, as the excited group won over the skeptics. But that didn’t occur by happenstance, or by sheer enthusiasm or market forces. It happened because, early on, we were able to identify the challenges to the Internet’s commercialization, and one by one, they were tackled, such that the barriers of entry kept getting smaller and lower, and the opportunities became larger and more reachable.

I saw this up close with the Internet, circa 1994, having participated in the advocacy of its early commercialization, via my affiliation with CommerceNet whose sole purpose was to help remove the barriers to adoption, evangelize its vision, and expose its benefits, by working on technological, educational, legal and regulatory initiatives that lubricated the Internet’s early development days.

Today, Bitcoin’s challenges are larger than its known opportunities, at least to the extent that they could be easily understood by the average person. We need to fix that gap, if we want Bitcoin to flourish.

Attacking it via a Framework Approach

We need to look at Bitcoin holistically using a Catalyst-Barrier-Solution framework perspective. This framework consists of accurately depicting the Catalysts: Business Drivers and Technology Enablers. Second, we need to table the Barriers that include Market, Legal/Regulatory, and Behavioral/Educational Challenges. Finally, we need to tackle the Solutions to each one of these barriers, one by one.

There should not be any illusion about the reality needed here. If we ignore the issues behind these barriers, many of them will not get solved on their own, nor will they go away.

The message behind this framework is to help us focus on what’s important. Magical things start to happen when business drivers are strong, when technology enablers are ready, and when solutions to challenges are found.

So, I’ve made this attempt to list them below, according to this framework. Btw, I have used a very similar framework in 1996 to depict the Internet’s characteristics in my book Opening Digital Markets, but have adopted it for Bitcoin. 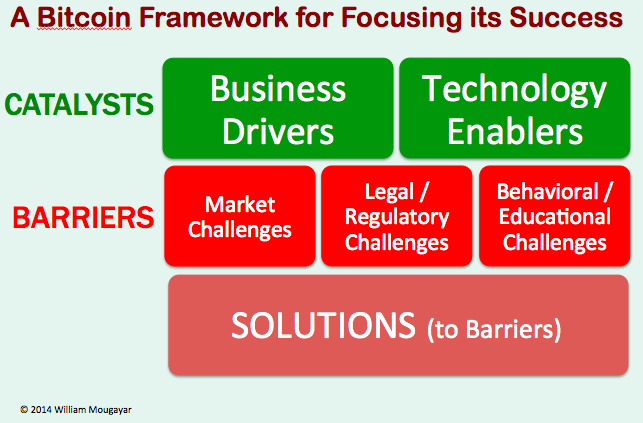 The above lists may not be complete, but the bullets give you an idea about what we need to focus on, in order to continue to assure the success of Bitcoin. It is surprising to note that the list of consumer behavioral challenges is not that long, because users want simplicity: they want to be able to understand it, believe that it is safe and secure, that it’s available, and that they can use it as easily as they can operate their smartphone.

Another way to understand Bitcoin is by portraying its evolution around 3 successive layers of architecture. I’ve again borrowed from a popular segmentation method I used in the late 90’s to explain the Internet. First, you basically need a strong set of Infrastructure capabilities as foundational elements. For the Internet, it was TCP/IP, HTTP, SMTP, etc. Then, you need to see a number of Middleware services that are built on top of the Infrastructure. Finally, thousands of Applications will flourish by relying on the Infrastructure and Middleware services, as they get built on top of them. There is a certain required sequence of iterative evolution to this landscape depiction, but it can serve as a clear visual representation of reality. 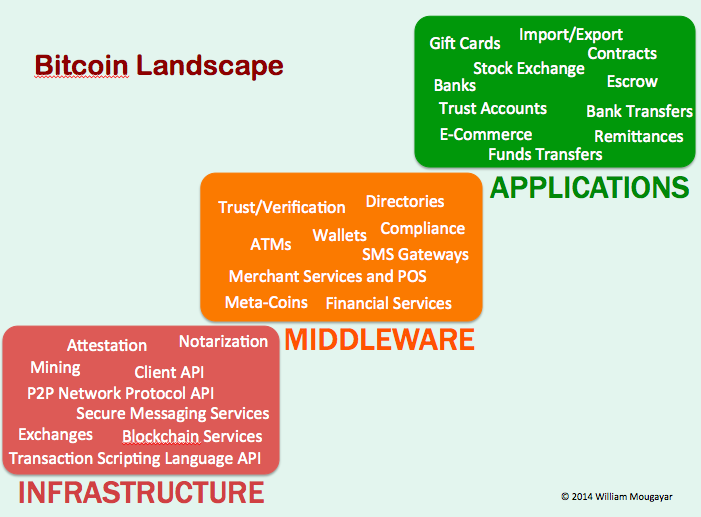 The groundswell activity around Bitcoin technologies is mind-boggling. Thousands of software engineers in hundreds of companies are developing innovative services and applications around Bitcoin because they have seen its future, and it has captured their imagination. But the Bitcoin vision that matters is the one that users see, because they are the ultimate proof point of Bitcoin’s success.

There is enlightenment in noting that from a user adoption angle, Bitcoin’s skepticism is way lower in less developed countries where the monetary systems are frail and corruption is rampant. There, people are seeing Bitcoin as an efficient and liberating system, away from the grips of central governments mediocrity. We must follow their lead, because they are seeing the effects of decentralized money when it empowers them.

After all, Bitcoin’s vision in the eyes of its founder, Satoshi Nakamoto was very simple: “A purely peer-to-peer version of electronic cash would allow online payments to be sent directly from one party to another without going through a financial institution.”

That is the essence of Bitcoin, at the consumer level. Of course, there are derivative business related products that will exist (ref. the Applications segment in the above slide), but if we don’t get past the critical mass of adoption at the consumer level, none of the other services will matter.

Getting Educated on Bitcoin

Moving forward, we all need to get better educated on Bitcoin. We need to understand it, and help others that don’t understand it yet. If you have one hour to invest, I strongly recommend this seminal video by Andreas Antonopoulos. I have not heard anyone more articulate about Bitcoin than Andreas.

We need to address Bitcoin’s challenges, collectively, and systematically. Perhaps, what is lacking is some authoritative consortium organism that sets and re-enforces the required agenda, and lubricates the work that is required to remove the barriers, whether perceived or real. Few of the challenges will disappear if we ignore them. Most will need to be tackled head-on.

Therefore, we may need to fund a new organization, or strengthen an existing one, as a non-profit organization that will be recognized as a global authority on Bitcoin, and whose sole mission will be to educate, remove barriers, advocate, and combat legal and regulatory barriers that are being erected to block Bitcoin’s success. This type of organization could take a page from what CommerceNet did, circa 1994-2001. [you’ll need to review web pages prior to 2001, because CommerceNet’s direction changed after]

Bitcoin cannot be above the law, around it, nor under it. It needs to deal with the existing perceptions about its safety and security, and it needs to turn many of its detractors into supporters. Ignoring all of them will not help.

We need less negative punditry around Bitcoin. There has been a recent flurry of opinions written by known authors who have attacked Bitcoin, but in that process they have shown their ignorance or lack of education about it.

A Bitcoin-supported money system is going to happen. There is no question about it. It is unstoppable.

So, let us work on putting a little more order and guidance into its evolution, removing or lowering barriers, tackling challenges, accurately describing its vision, and focusing on innovation around its application.

Now is the time to elevate Bitcoin’s evolution and put it on the right path of global support.

Understanding the Politics of Tech Startups