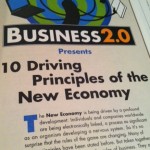 This week marked the 15th year anniversary reunion of the launch of the Business 2.0 magazine (first issue July 1998). As their first columnist, I was involved with Business 2.0 during the planning stages, leading-up to the first issue’s release, and working with the founders and original editors and writers. If you are young enough not to remember the magazine, Business 2.0 chronicled the transformational power of the Internet on business, hence the name Business 2.0, and the name came out of a conversation between Chris Anderson (Business 2.0 founder who later purchased TED) and Jeff Bezos at TED. Jeff apparently blurted it out.

One of the staples of that first issue was a seminal centerpiece titled “10 Driving Principles of the New Economy”. A small group of 29 advisors that included me, Jeff Bezos, Michael Dell, Halsey Minor, Kim Polese, Steve Jurvetson and others, helped Business 2.0 develop these principles that became the foundational thesis of the magazine’s content for several years ahead.

On this anniversary, I decided to reprint these Principles, in order to provide some perspective and reminder on where we were in 1998. After each original principle, I added my 2013 Reality Check.

This list is useful because it was well thought out, and carried long lasting value, to this day. It’s important to learn from the past, and not constantly re-invent everything. And it’s interesting to realize how far we have come on many issues, while we are still working on others.

For context, in 1998, the Web included only 150 million users, less than Twitter has today. And the commercialization of the Web was just about 3 to 4 years old. We were still learning it.

This was the opening paragraph about these 10 principles, followed by the original list and my commentary:

The New Economy is being driven by a profound development: Individuals and companies worldwide are being electronically linked, a process as significant as an organism developing a nervous system. So it’s no surprise that the rules of the game are changing. Many of these principles have been stated before. But taken together they constitute a revolution in the rules of business. They are the basis upon which Business 2.0 is founded.

1998: It’s a cliché, but it’s the key to the New Economy: Processing information is dramatically more powerful and cost-effective than moving physical products. Increasingly, the value of a company is to be found not in its tangible assets, but in intangibles: people, ideas, and the strategic aggregation of key information-driven assets.

2013 Reality check: We’re taking information-based products for granted now. It is the basis of most new products that startups develop, although we are just starting to see an increasing number of useful smart devices in the “Internet of things” category. In 1998, Yahoo! was the best example of a company whose entire products were “Internet information-based”. Today, being “information-based” is a standard. And often, there is no other equivalent.

2. SPACE. Distance has vanished. The world is your customer-and your competitor.

1998: Geography has always played a key role in determining who competed with whom. Now your business can connect instantly with customers all over the globe. Flipside: You’re exposed to worldwide competitors as well. The opportunity — and the threat — has never been greater.

2013 Reality check: Easily taken for granted now, the shrinking of distance is a key aspect of the Internet. But we can do more in this area. Few startup companies truly operate in a broad distributed manner. Automattic, parent of WordPress is a good example of a distributed structure company. For larger companies, this has led to a big global labor arbitrage trend that is still going on. And there are still geographical barriers when it comes to regulation, copyright, censure, transactions, or content licensing issues.

1998: In a world of instantaneous connection, there is a huge premium on instant response and the ability to learn from and adapt to the marketplace in real time. Winning companies accept a culture of constant change and are willing to constantly break down and reconstruct their products and processes — even the most successful ones.

2013 Reality check: Speed and agility are the mantra of new product development. Lean startup and agile software development processes epitomize the fact that time has collapsed. In 1998, Dell Computers was the poster company based on its just-in-time custom built PCs.

4. PEOPLE. They’re the crown jewels… and they know it.

1998: Brain power can’t be tallied on a ledger sheet, but it’s the prime factor driving the New Economy. More than ever in history, huge value is being leveraged from smart ideas — and the winning technology and business models they create. So the people who can deliver them are becoming invaluable, and methods of employing and managing them are being transformed.

2013 Reality check: Whereas in 1998 large companies used to have a lock on most talented people, talent has since migrated to hot startups and companies experiencing growth. But in hindsight, I would have placed People in the category of principles that still apply, because the people asset will always be a critical asset.

5. GROWTH. It’s accelerated by the network.

1998: The Internet can dramatically boost the adoption of a product or service by “viral marketing,” network-enhanced word of mouth. Communication is so easy on the Web, product awareness spreads like wildfire. So once a company reaches critical mass, it can experience increasing returns leading to explosive growth. This principle means that in the New Economy, first-mover advantages are greater than ever.

2013 Reality check: In 1998, Hotmail was the first product to go viral on a large scale, with 100,000 new sign-ups per day. Still, today, 100,000 new sign-ups per day would be considered extremely viral. Social/online virality and growth hacking have been hitting their strides in the past 3 years. Today, Facebook, Twitter, Instagram, and Vine are great poster examples for what network-based user growth looks like in 2013.

1998: For products that help establish a platform or a standard, the network effect is even more pronounced: The more plentiful they become, the more essential each individual unit is, a striking exception to the economic rule that value comes from scarcity. In addition, some companies give away their products to establish market share, then sell linked services later on. Network effects were experienced historically in the adoption of telephones and fax machines. The difference today is that because everyone is linked, far more products and services gain their value from widespread network acceptance.

2013 Reality check: That particular Network Effect description was quite ahead of its time and brilliant. We have only started to see these network effects come to life after 2006 roughly, with the advent of Web 2.0, social networking and platform-based companies. In 1998, the best description of standard-based value was RealNetworks via its streaming media player that was distributed for free, so it could be widely adopted.

1998: Traditional distributors and agents are seriously threatened by a networked economy in which buyers can deal directly with sellers. But a new brand of middleman is being created. As the amount of info-clutter grows, these infomediaries are needed to turn dumb data into usable information. They offer aggregated services, or intelligent customer assistance, or powerful technology-based buying aids, or an attractive, community-based buying environment.

2013 Reality check: This was one of those trends that started early and continued to roar ahead steadily, to this day. Amazon is a perfect example, but for every industry, there are cases of new intermediaries that have emerged, in travel, music, shopping, financial services, etc. We don’t think of all of them as intermediaries today, because they are the business itself. Think Amazon, Travelocity, Spotify, Groupon, and even Google.

1998:  It’s no longer necessary for your customer to walk down the street to compare prices and services. Your competitor may just be a mouse-click away. And intelligent software will help buyers find the best deal. So businesses that genuinely offer unique services or lower costs will flourish, benefiting from a flood of new buyers. Those that have relied on physical barriers to competition will fail.

2013 Reality check: This is e-commerce at its best. In 2013, it is thriving with new models that continue to innovate; whether it’s Etsy, Fab or Julep. One major industry that was expected to go big, but didn’t is the automobile industry. Remember Auto-By-Tel? It is now a car review and referral service.

9. TRANSACTIONS. It’s a one-on-one game. Information is easier to customize than hard goods.

1998: The information portion of any good or service is becoming a larger part of its total value. Thus, suppliers will find it easier and more profitable to customize products, and consumers will begin to demand this sort of tailoring.

2013 Reality check: While online transactions were a novelty in 1998, they are the norm now. Transactions are the spine of the commercial Internet.

10. IMPULSE. Every product is available everywhere. The gap between desire and purchase has closed.

1998: The shelf space of the World Wide Web is unlike any other in that it has no bounds. Artificial constraints on choice are replaced by the ability to purchase the precise product you desire. The impulse to buy and the purchase itself used to be separated by a combination of physical and mental barriers. When you heard a song on the radio, you had to both remember the song or the artist and actually go to a store to purchase. Online, it’s different. Discover a product you desire, and just hit the “buy” button. Consequence: The processes for marketing, sales, and fulfillment are merging.

2013 Reality check: Still true. The gap between desire and purchase has indeed been closed. The Internet has removed friction or delays, and allowed us to purchase digital goods or information-based products and services, immediately after a trial.

At the end of these “new economy” principles, there was a list of 10 Principles that still apply. They all still do. And it’s a good reminder for startups today.

1. Customers matter.
This was in response to a fallacy that large numbers of users were sufficient. Still true today, especially for large networks in search of their business model.

2. One day, revenue needs to exceed cost.
In 1998, we used to justify this delay by saying the company is focused on a “land grab”. Now, we’re saying that we need lots of users to figure out the revenue model. Still, in 1998 and 2013, there is a fascination with acquiring users, sometimes at any cost.

3. Trust is the basis of business relationships.
It’s a good reminder that you need to be as transparent on the web as you would in real life. Today, social media has allowed some people to express themselves in ways not possible before.

4. There are only 24 hours in a day.
I’m not sure what that one meant. Maybe Jim Daly (Business 2.0’s founding editor) will chime in the comments.

5. There will always be value in brands.
I love that one, and it’s a great reminder to all startups and emerging companies to work on their brand, as soon as they start to achieve product/market fit.

6. There will always be competition.
So much for the statement “we don’t have any competition.”

7. People are self-interested. So are companies.
Selfishness has its rewards.

8. People need a powerful incentive to change their behavior.
Big reminder. Your competition is often users “doing nothing”, and being indifferent about your product. So, think hard about your value proposition, how you position your company and message it to the market.

9. Sex sells.
Some sizzle before the steak is a good thing.

10. No one really wants a relationship with a telephone company!
You had to be in 1998 to understand this one. Telcos were trying to get into different businesses and failed miserably. Since then, they reverted to continuing to extort monthly fees from locked users.

What Did the 10 Principles Miss?

Although these principles weren’t mean to pinpoint specific technologies or solutions, here is a quick list of some major trends that happened after 1998, and where it would have been difficult to even deduct their development, based the 1998 list.