Thomas Eisenmann, professor of Business Administration at Harvard Business School teaches the management of ventures and startups. He recently published his famous annual compilation of best blog posts on startups into a book/ebook entitled Managing Startups: Best Blog Posts. O’Reilly was generous in their willingness to publish it, while donating all of their profits to Endeavor Global, a global organization that fosters entrepreneurship. So, if you click on that link and buy the book, you would be doing yourself a favor and helping a good cause. His seminal collection has been an inspiration for me, and is a must read for any entrepreneur. 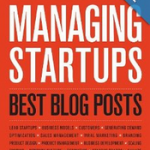 Tom just wrote an excellent article, Head Games: Ego and Entrepreneurial Failure (original link, and reposted here with permission), where he talks about the causes of entrepreneurial failures, whether they are ego-driven or coming from other reasons, and he ends by suggesting how to “fail right”. In the article, Tom draws on recent blog posts from Mark Suster, Paul Graham, Peter Thiel, Steve Blank, Brad Feld, Jerry Colona, etc…and puts it all into a cohesive and practical context. This is a MUST Read, let alone for the extensive links in it.

Entrepreneurial success hinges in large part on a founder’s mastery of psychology. This requires the ability to manage one’s responses to what Ben Horowitz calls “The Struggle,” that is, the emotional roller coaster of startup life. Paul DeJoe captures the ups and downs of being a startup CEO in a post reprinted in a book that I edited, Managing Startups: Best Blog Posts.
It’s all in a founder’s head: the drive to build something great; the resilience to dust yourself off when you repeatedly get knocked down; the passion powering a Reality Distortion Field that mesmerizes potential teammates, investors, and partners. But inside a founder’s head may also be delusional arrogance; an overly impulsive “ready-fire-aim” bias for action; a preoccupation with control; fear of failure; and self-doubt fueling the impostor syndrome. That’s why VC-turned-founder-coach Jerry Colonna named his blog The Monster in Your Head. In a recent interview with Jason Calacanis, Colonna does a nice job of summarizing some of the psychological challenges confronting entrepreneurs. So does a classic article by the psychoanalyst Manfred Kets de Vries: “The Dark Side of Entrepreneurship.”
Causes of Entrepreneurial Failure
If entrepreneurial success hinges on a founder’s mastery of psychology, it stands to reason that a founder’s flawed ego is often the root cause of startup failure.
Categorizing causes of entrepreneurial failure is tricky. Asking entrepreneurs why their venture failed doesn’t always yield reliable answers. To bolster our fragile egos, we credit our successes to our own brilliance and skill, and we attribute our failures to the shortcomings of others or to events outside our control. This pattern is so deeply ingrained that psychologists have labeled it the Fundamental Attribution Error.
Furthermore, just as a living organism might die for many reasons—for example, hunger, predation, or illness—startup failure has diverse causes. Paul Graham cites 18 reasons why startups fail; in her post, What Goes Wrong, reprinted inManaging Startups, Graham’s partner at Y Combinator, Jessica Livingston, warns founders that they must navigate a “tunnel full of monsters that kill.”
Finally, explanations for startup failure are often linked in a complex chain of causality. Running out of capital is often the proximate cause of death. But this implies that an entrepreneur couldn’t raise more funds. Why? Because the venture had little traction. Why? Because the team was slow to market with an inferior product, relative to rivals. Why?
In the spirit of “Five Whys” analysis, one should continue probing until the root cause for failure is revealed. Digging deeper often reveals that startup failures have ego problems at their core.
Ego-Driven Failure
At the risk of oversimplifying, the ego issues that can derail an early-stage startup come in two broad groupings. Some founders are ambivalent about their vision or their level of commitment to their venture. Others are headstrong—too confident about their vision and their ability to lead. In fact, Peter Thiel hypothesizes that plotting founders along such a spectrum would yield an inverted normal distribution—one that is fat at both tails, rather than in the middle.
Ambivalence. Steve Blank tells a tragic story of a founder failing from a lack of nerve. Entrepreneurs who are irresolute, weak-willed, and wavering can cause problems like these:
Obstinacy. Startups run by founders who are control freaks, headstrong, or arrogant often precipitate the same problems listed above, but in very different ways:
There’s no science behind my characterization of founders’ egos as lying somewhere on a spectrum that ranges from ambivalent to obstinate. I’m sure this one-dimensional view makes trained psychologists cringe, because it ignores a mountain of research pointing to a “Big Five” set of stable personality traits: openness, agreeableness, extraversion, conscientiousness and neuroticism. Adeo Ressi’s Founder Institute draws on such research in the admissions test for its training program. Based on analysis of responses from over 15,000 aspiring entrepreneurs, the test sheds light both on the traits of successful founders and the attributes of Bad Founder DNA: excuse-making, predatory aggressiveness, deceit, emotional instability, and narcissism. Founder Institute’s research confirms: it’s all in the head!

So, what should a founder to do to master the monsters in her head?
Self-reflection is the starting point. What motivates you? How do you respond to pressure and uncertainty? For some, therapy with a professional psychologist will put this in focus. For others, a startup coach like Colonna can provide helpful guidance, as can a good mentor. Regardless of where you seek such counsel: ask for help, tell the truth, and listen.
If you are thrashing around and pivoting too quickly, follow Steve Blank’s advice to Yuri: sit on any new insights for 72 hours, and brainstorm them with someone you trust.
Build the discipline of debriefing to learn from your startup’s failures. Discerning the causes of small setbacks may help you stave off big ones. The U.S. Army’s After-Action Review process provides a template. With an AAR, a team asks four simple questions: What was our objective? What happened? Why did it happen? What do we do next?
In conducting post-mortems, however, be on guard for the Fundamental Attribution Error, that is, a tendency to blame failure on events outside your control. Also, as Blank points out, you’ll be in a better position to learn from a big failure if you recognize that your emotional response to it may follow Kubler-Ross’s five stages of grief—denial, anger, bargaining, depression, and gradual, grudging acceptance.
Follow the advice of Spencer Fry and find healthy ways to relieve stress. Recognize that such stress puts entrepreneurs at increased risk for depression. If you believe that you or someone you work with may be depressed, seek treatment NOW. And read Brad Feld’s posts to learn more about depression and how to manage it.
Finally, follow the advice of David Tisch, and never lose sight of the ‘why.’ Tisch advises founders to constantly ask whether they are still on the path that originally motivated them to launch a startup, for example, the desire to disrupt an industry, to build a great company, or simply to be independent. If not, Tisch says, it’s time to wind things up. As Brad Feld points out, sometimes failure is your best option.
Thomas R. Eisenmann is the Howard H. Stevenson Professor of Business Administration at the Harvard Business School and Faculty Co-Chair of the HBS Rock Center for Entrepreneurship. He studies the management of new ventures. Eisenmann teaches two MBA elective courses: Launching Technology Ventures, which examines challenges that entrepreneurs encounter when starting and scaling new information technology businesses, and Product Management 101, in which students specify and supervise development of a software application. [Full Bio]
Previous Story

How Do You Discover What Customers Really Want?