If you are part of the technology startup ecosystem, you will see yourself everywhere inside this book. 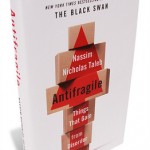 As you plough through it (and ploughing you will), you won’t stop nodding at a myriad of analogies that are intrinsic to the technology ecosystem many of us know and live in today.

If there was a poster depiction of an Antifragile creature, it’s the tech startup. Startups are born immature and shapeless, but with every experimentation, evolution, release, feedback, setback or failure, they become stronger. Each iteration aligns it better on the right path, and every small mistake that is corrected or avoided makes it stronger.

So, I focused this review of the book Antifragile to the confines of its applicability on the subject of technology startups.

Antifragility is a solution to Taleb’s depiction of The Black Swan problem—the impossibility of calculating the risks and predicting the occurrence of consequential rare events.

Taleb wrote Antifragile: Things That Gain From Disorder as a follow-up to his previous book (The Black Swan) to propose rules for moving from the fragile toward the antifragile in every domain or area via a reduction of fragility or by harnessing antifragility.

First, let’s cover the basics. What is Antifragility?

The Fragile, The Robust and The Antifragile
Understanding this new concept starts when you ask yourself: what is the opposite of fragility? The answer is not robustness, and it’s not resilience. These are merely middle grounds. The opposite of fragility is Antifragility, and it is a state where things improve with every shock, uncertainty, volatility or crisis they face. For example, if you shipped a fragile item, you would write on the package “Handle with care”. And if the package is not fragile, you write nothing. But if the package were antifragile, you would write “Please, mishandle”.

Factoid– Taleb researched some 80 languages to find out if they had a word depicting the opposite of fragility before resolving to invent a new one.

To help us see how the ideas in his book apply across domains, Taleb developed the “Triad”: a) the fragile, b) the robust, and c) the antifragile. The fragile wants tranquility, the robust doesn’t care too much, and the antifragile grows from disorder. So, for a given subject, item or a policy, the task is to find in which category of the Triad one should put it and what to do in order to improve its condition. For example, in the area of Finance, Taleb is friendly to Venture Capital as he labels it Antifragile, whereas Debt is in the Fragile camp, and Equity in the Robust one. In the Business category, Taleb places the New York-centric Banking System in the “Fragile” bucket, while at the opposite end, typifying the Antifragile, he places the Silicon Valley “Fail fast, be foolish” model.

Taleb and Greenspan
Nassim Taleb has a long history of criticizing the U.S. banking system and its flawed practice of incentives and poor “risk management” when he started sounding the alarm bell at least a year prior to the 2008 economic crisis, in The Black Sawn. He was definitely vindicated when he testified in front of a (clueless) U.S. Congress in 2010 on the topic of finance reforms [Part I & Part II].

For Taleb, Greenspan’s obsessive meddling with the U.S. economy to give it the appearance of stability (by eliminating randomness) is what actually weakened it against all the storms that later came to hit it.

If Greenspan could, says Taleb, he would eliminate the four seasons so we could live at a constant 70 F.

Antifragility and Entrepreneurship
In no uncertain terms, Nassim Taleb is a proponent of entrepreneurship as a way to teach us resilience and antifragility. “There is no such thing as a failed entrepreneur”, says Taleb, and of course this is a known cliché if you’re already a knee-deep tech entrepreneur.

Let’s see how Antifragility applies to entrepreneurship and tech startups.

1)   Decentralized system. The startup ecosystem with all its players, from VCs to startups, and anything in-between is very decentralized. Why is this important? Because one failure doesn’t propagate into the system. “You want the errors to be spread out”. Over centralization is not good. Errors make the rest of the network stronger, because those who have failed and learned become better entrepreneurs.

2)   Learning from mistakes. “What kills me makes others stronger.” Of course one learns from startup failures. But these failures are small errors in the grand scheme of things because they are lessons for others. “Fail for others to succeed – One day you may get a thank-you note.” “The Antifragile has a love of errors, a certain class of errors.”

3)   Surviving uncertainty. Startups survive uncertainty on a daily basis, but they also thrive on it, because it’s their normal environment. Every time you get feedback from your iterations, you’re uncovering another level of visibility about where your business is going. “You want to be the fire, and wish for the wind.” “The Antifragile loves randomness and uncertainty.” “I want to live happily in a world I don’t understand.” If that last sentence isn’t an entrepreneur’s motto, I don’t know what is.

4)   Unharmful volatility. Getting in trouble is OK. Innovate by getting in trouble. Taleb asserts:“How do you innovate? First, try to get in trouble.”So many startups are getting in trouble, mostly in the seed stages. But these troubles aren’t harmful to the system. “Volatility cleans up the system from harmful material.”  If a VC fund or startup doesn’t perform well, that doesn’t bring the whole system down.

5)   Constant bottoms-up tinkering. “Bottoms up tinkering and trial and errors benefits from uncertainty.” In the startup world, so much is learned from small experimentation where you keep what works, and throw out what doesn’t. The aggregate tinkering later evolves into lessons. Taleb says: “Business plans are like getting on a highway with no exits. Tinkering is like getting on a highway with so many exits- you can exit whenever you want and discover something new”. Taleb further pokes fun at academia by observing, “most things derived by trial and error are later claimed by academia as coming from theory”. “Things found via trial and error are the intelligence of Antifragility”. Hurray to that.

6)   Skin in the game. That is the best form of risk management. The feedback loop must be able to hurt you or reward you. Imagine if VCs were immune to their success or failures and received a bonus every year no matter what. Imagine entrepreneurs that don’t benefit from upside nor get hurt from downsides (via liquidation preferences for example). In the startup ecosystem, everybody has skin in the game!

7)   Embrace fragility but know its boundaries.“Fragility is linked to small probabilities.” They are the ones that put you at risk. Take the highest levels of risks early, and progressively less as you go into higher stages. That’s the whole raison d’etre of the progressivity of steps behind a venture-backed company that goes from seed, to angel, to Series A, B, C, D, etc. There is de-risking at every subsequent stage.

8)   Big gains from a small sample. If you analyze any VC portfolio, you will find that the biggest gains come from a small number of companies they invest in. You are harmed much less by an error than you can benefit from it, so you would welcome uncertainty in the long run. “More gain than pain from a random event.” So, yes the exit is a random event because its probability is low. VCs and entrepreneurs take the risk, but they also benefit from it.

Embrace Antifragility
In this review, I only covered some parts from this book, and intentionally left out several others so you can indulge with your own discovery and interpretations.

Hopefully, you’ll see why this is a book that must be taken in all seriousness because it is going to alter some of your thinking about how you view the world around you.

Antifragility will make you smarter.
Don’t just read it. Live it.

Disclaimer: Nassim and I went to the same high school, so we’ve known each other for a number of years.