Do you ever wonder why most cryptocurrencies rise and fall together like a herd?

Seemingly, there is no discrimination between good and bad coins, and the root cause is a lack of discrimination between smart and dumb money. In theory, smart money will find the better coins, because their information signals are better. But when the majority of investors are from the dumb money category and generating a disproportionate amount of trade activity, the supply/demand dynamics are messed up.

In truth, there is a lack of significantly visible traction metrics for these coins, and not enough credible valuation  metrics that can be universally applied. Speculators don’t care for these metrics. The only Kool-aid they drink is a belief that skies are the limit, and price multiples grow on trees.

That’s why I am always on the hunt for tokens that are actually used, and have been saying: 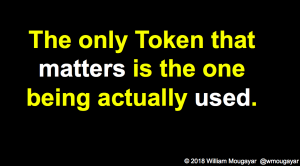 We are in dire straits for token usage metrics, not just to vindicate the “utility token” moniker, but also to eventually bring some sanity into how we could evaluate some of these coins.

In the long term, I believe that not all coins are equal. And not all coins deserve the same valuation metrics. Super tokens like Bitcoin or Ethereum are multi-purpose, and they might deserve extraordinary multiples in part because it helps them secure their sovereignty as bona fide consensus protocols with strong crypto-economic defenses against theoretical attacks. (although with POS the attack equation changes a bit.)

Aside from technical protocol coins, most other coins will be more closely aligned with end-user traction as the primary correlation factors for their valuation. This includes all flavors of app coins including the upcoming variety of so-called governance coins.

The purpose of a coin is to create economically valuable business models directly or indirectly via the ecosystems they engender.

Of course, market prices can be influenced by news instead of usage activity, or they can be artificially influenced by lopsided token distributions that affect price elasticity as a result of the scarcity of the trading pool. But these are short term, centrally manipulated tactics that eventually run their course. You can amplify and concoct your news for so long before that game is up, and you can lock your reserve tokens for so long until eventually your Token economic models catch-up with reality.

If you look at CoinMarketCap, you get a macro view of the market, but if you look hard at the project levels, the real traction will be revealed from the bottoms-up metrics related to real usage. Below is a list of the Macro vs. Traction View metrics, as I see them.

The Macro View is Top Down whereas Market Reality Traction happens Bottoms Up via Outcome and Activity metrics. 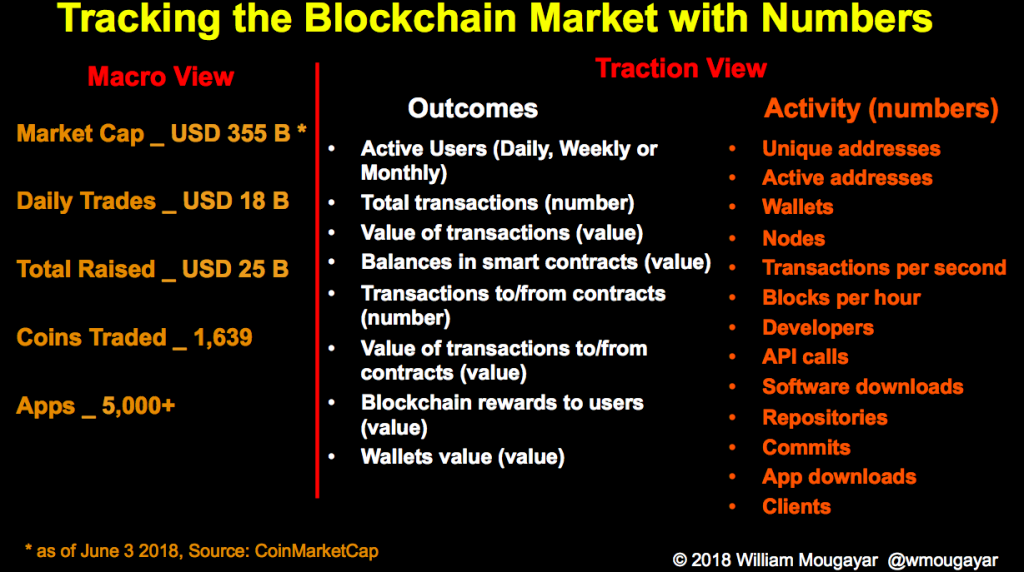 Until there are real revenues and profits (if that applies), I’d like to see more traction metrics from blockchain companies. We need to see them soon.