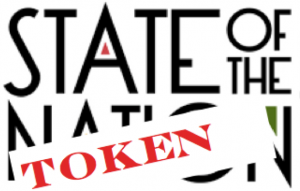 I’m sharing the following pdf’ed powerpoint presentation, depicting where I see the status of the token market today.

I have been delivering a version of this presentation in the past 3-4 months at various keynotes across North America and Europe. This version  is updated and more comprehensive than what I ever presented publicly. It is further augmented by the following analysis points:

It is worthy to note that the regulatory landscape is divided roughly into 3 buckets:

1) alternative jurisdictions who are innovating and seeing this activity as a market share opportunity,

2) traditional Western regulators who are trying to apply (or interpret) existing regulation to what they see, in essence exacerbating the proverbial attempt of fitting a square peg into a round hole,

3) the “rest” of the world who is doing little to nothing, while observing others, and eventually planning to follow.

Entrepreneurs are still attempting to use the token as a fund raising mechanism, with a varying spectrum of strength on actual Token models, and even less attempts at real governance and accountability towards investors or the market.

I see continued lukewarm innovation in the middleware sector of blockchain technology. We need more standards, because standards increase adoption, and we need more integrated tools and development frameworks, because they spur activity in applications development.

Two potential blockchain usage models are emerging with some initial promising  tractions: a) the token as a participation incentive for adding value to the network (I’ve described this here and here), b) the native digital asset as a free-moving instrument that can be traded on the blockchain or made part of a new interaction experience (eg CryptoKitties-like assets and others, including the nascent form of digital art).

Classification of tokens will continue to be a slippery slope. Attempts to intelligently classify them is challenging, because their role is evolving like a moving target: a given token’s usage lifecycle will take many forms of evolution, as most tokens espouse multi-functional properties. Assigning a deterministic label on a token might be a futile exercise.

Tokens as an in-market payment instrument is the most un-imaginative model out there. Sure you can take any existing business, slap a token to pay for this and that, and claim a token-based model. But that’s not nearly enough innovation to move the needle on value creation and attracting new users. Projects based on the token-as-payment model are dead-on-arrival, and will fail in my opinion…unless there’s a lot more to the token than being another currency.

DApp Apps are emerging as the mobile cousins of a Metamask-enabled browser. Early DApp browsers such as Toshi, Cipher (acquired by Toshi) and Trust Wallet are still in their early 1.0 manifestation, and mostly aggregate access to other DApps more than innovate over new ground. Going forward, their future might be uncertain as standalone native DApp Apps will also become popular, perhaps not requiring crutch support from these DApp browsers. In this category, I foresee OpenBazaar and CryptoKitties to lead the way in showing us what a real standalone Peer to Peer Mobile DApp can do. [disclosure: I’m an investor in both companies and a Board member at OpenBazaar]

There is a continued disconnect between cryptocurrencies value and valuations (ref: The Other Flippening: Token Users vs. Token Traders). Despite many attempts to quantity the metrics behind cryptocurrency valuations, the markets have not yet assimilated any form of analysis rationales behind the trading patterns. Most cryptocurrencies go up or down together, with little regard to differentiation between the better vs. more questionable ones.

Stablecoins continue to fascinate more than deliver or assert themselves as a long term answer to isolating users from the vagaeries of external market volatility.

Finally, a word about “the crash“. A real crash could only happen when investors suffer real losses and incur pains that cause them to massively exit the playground. Currently, there is sufficient built-in performance gains that have accrued to early investors such that prospective losses are only time-relative, but not absolute.