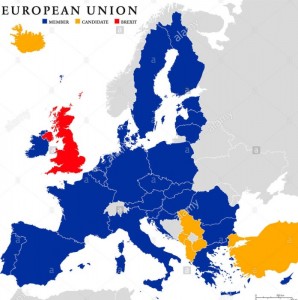 I recently spent a few days in Geneva, Switzerland, and rented a car on the week-end to make side day trips to neighboring France. This wasn’t the first time I had driven across Europe in a car, but it was the first time since the Schengen Agreement abolishing border checks and enforcing a common visa policy went into effect.

What struck me as we passed multiple times the pseudo-border between Switzerland and France was the openness and ease of passage between the two countries.

Over 4 crossings (twice back and forth), the range of experiences included total openness across a deserted border crossing, to officers signaling cars to keep moving, to being stopped briefly once for 20 seconds and asked 2 simple questions by the French authorities: where we were headed, and where we came from. Perhaps due to my impeccable French, no documents were ever requested.

We can expect this kind of openness within the EU, and I had already experienced it flying or taking the train between EU countries. But Switzerland is a special case, being surrounded by EU countries (except a tiny border with Liechtenstein), while not being an EU member. As it turns out, Switzerland has reciprocal agreements whereby the Swiss Confederation has adopted various provisions of European Union law in order to participate in the Union’s single market.

Within the EU, this openness is possible because EU countries respect and accept each others border crossing practices and procedures. Had I been crossing outside of the EU, the scrutiny and passport checks would have been different and elevated.

This frictionless experience made me think of the blockchain analogy.

Contrast that to the global banking environment that is full of “border-crossing” checkpoints, and subject to strictly managed entry and exit points for money deposits, withdrawals or transfers. Each bank has its own borders, often dictated by geographical regulation. You can only open a bank account where you reside or do business.

The irony of this analogy is that- while the intent of the current banking system is control and “knowing who their customers are”, that system breaks as soon as the customer or their transaction leaves one bank and go to another. While each bank administers its own independent “know your customers” processes, these processes aren’t connected or related to one another.

Blockchain networks are more cohesive and transparent. You can easily traverse them and see transaction history across addresses, regardless of geographical or location origins.

Related to this, I ran yesterday this Twitter survey, wondering what would happen if fiat-to-crypto linkages were more seamlessly connected.

I was surprised by the results, expecting to see more crypto-to-fiat inflows initially, because I thought that many crypto-wallets were bursting at the seams with crypto holdings that are looking to be converted into fiat. However, the crowd seems to think that more fiat will flow into the crypto side, initially at least.

This tweet replying to my survey probably echoes the sentiment of many:

I dream or more crypto to fiat options. @AriseBank

Regardless of the real outcome of this survey question, the banking world is getting surrounded by the crypto world. More than 2 years ago, I’ve wrote a post about Why There is No Global Cryptocurrency Bank yet, and much of it still applies. For traditional banks, resistance to the crypto world will be futile. Their existing set-up had a purpose: they didn’t want a borderless world to interfere with their monopolist operations, something that the blockchain threatens.

If the fiat-to-crypto-to-fiat borders were more fluid, we could imagine a scenario where users can use the crypto world as a global on-ramp to make money transfers seamlessly, in essence by-passing the proverbial SWIFT system. For example, a user could send fiat to their crypto account then use that to transfer to another recipient’s crypto wallet. The recipient can then move the money to their bank account. The whole process could take 15 minutes and cost minimal transaction fees, certainly less than the cost of a standard international wire transfer.

The blockchain world is like a global Union. Once you’re in, the borders and barriers are minimal, frictionless and permission-less. But it is full of friction as soon as you want to leave it, or enter it from the traditional side. The friction between the non-blockchain and blockchain worlds is real. It is not dissimilar to the difference between travelling within the European Union and outside of it.