In June 2017, the cryptocurrency world got distracted with the flippening prediction, a reference to when Ethereum was going to overtake Bitcoin in terms of market capitalization. That flippening got close, but didn’t happened. 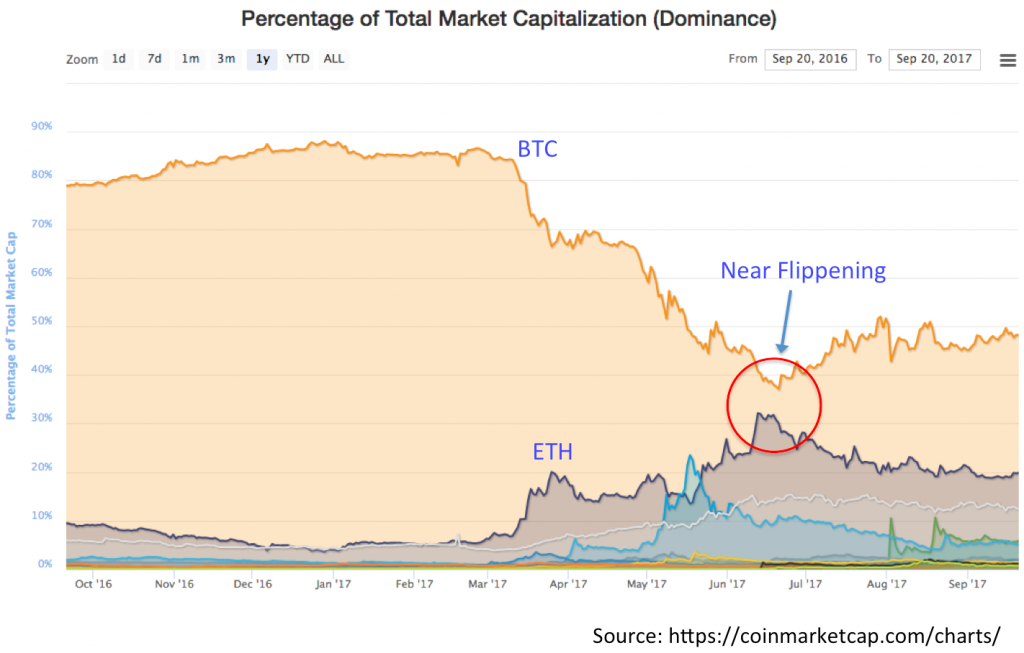 Tokens are issued for a specific purpose, typically as the main economic unit of a blockchain protocol, infrastructure, or application. That’s the user view. More user activity in the form of engagement with the platform being provided (infrastructure, protocol or application) is the ultimate goal.

In contrast to the end-user (or developer) view, the investor view is to see the token as a financial instrument whose value appreciates over time.

Currently, there is a divergence of motivation between users and investors. If the bulk of activity is tilted towards investors, that tends to increase the token value, with a risk of over-valuation.

This balance must be achieved on a case by case basis. Each application, protocol or infrastructure must strive to increase its token usage level to counter the natural pressures of investor frenzy that want to push the token price up, without any regard to token-based user engagement. Some investors don’t even understand what the token actually does, let alone have an interest in experiencing its utility. This isn’t unlike the current structure of public capital markets where, for example not all stockholders of Tesla’s stock (TSLA) own a Tesla, but at least they believe in the long term growth of the company, hence buy the stock as a value appreciation proxy.

I’m not sure what the right equilibrium ratio is, or whether knowing it accurately matters. Maybe we can point to Bitcoin and Ethereum as references, since these two networks are mature now with plenty of actual usage. But even then, the volatility in price fluctuations for these two currencies is still high, which points to the fact that speculators still believe that these networks are undervalued, and there is this constant cat-and-mouse chase of value versus valuation.

The following chart depicts a theoretical progression for the value vs. valuation gap, over the lifecycle of a token. Note that the depicted gap is relative. 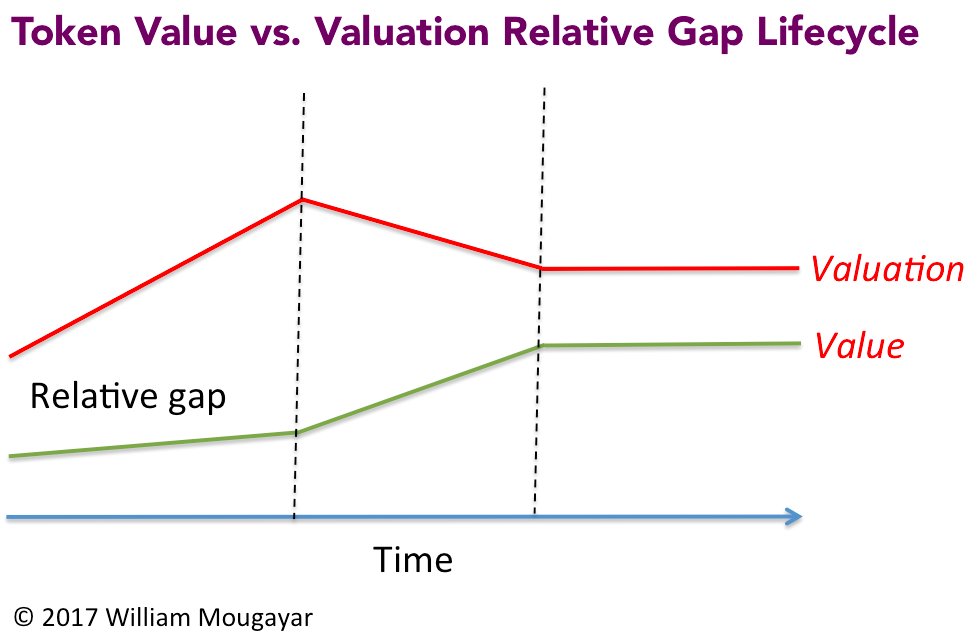 I’ve already written about this in this past article, where I’m re-publishing a relevant passage that is worth re-reading:

This is why I’m a proponent of seeing some visible form of operational token utility prior to allowing the token to trade in the hands of public speculators. Even if the token utility is still not mature or complete, at least seeing its beginnings would give a reality check on where it is going. (Melonport is a very good example of a protocol that can already be used with its token, prior to its final public release)

The speculative hype can live for so long before there is real value. A vision, a white paper, or market advocacy are not tangible value. They are a promise for future value.