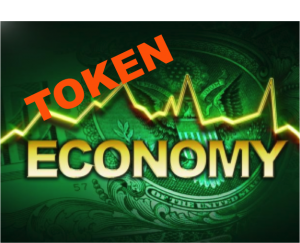 Despite the incredible amount of attention and material written about cryptocurrency tokens, there hasn’t been a good mainstream definition of what they are. In the technical realm of the blockchain, the concept of a cryptocurrency token is well understood. It represents a programmable currency unit that is bolted to a blockchain, and is part of smart contract logic in the context of a specific software application. But in the non-technical arena, what is a token, really?

A token is just another term for a type of privately issued currency. Traditionally, sovereign governments issued currency and set its terms and governance; in essence directing how our economy works with money as the exchange medium for value. With the blockchain, we now have new types organizations (and soon, more of the existing type) who are issuing their own currency in the form of digital money as cryptocurrency, and they are setting their own terms and rules around its operations, in essence creating new self-sustainable mini-economies.

What was the purview of governments is now in the hands of the many.

In the business realm, we can define the token as:

A unit of value that an organization creates to self-govern its business model, and empower its users to interact with its products, while facilitating the distribution and sharing of rewards and benefits to all of its stakeholders.

The Achilles heel of token-based models will be how they are concocted to interact with the business model that underlies them. However, much of the attention has been on designing ICO’s to optimize for cryptoeconomics, a term that has come to describe the mechanics and specifics of token distribution, according to a given sale and ownership structure.

Going forward, the token usage relationships will be far more important than the design of its underlying cryptoeconomics. As this article aptly points out, there is no perfect token sale structure. You can precisely engineer an ICO and that will get you to launch it properly, but then you still need to deliver a viable business model for the long term.

In early 2015, I explained (yes, it was quite early) token usages in the context of a Distributed Autonomous Organization Operational Framework, and I summarized a few usage models including the rights, rewards and work models that are being practiced now. Much of what I wrote then applies today, even more so, especially this part:

“The key objective of a DAO is value creation or production, and to make that happen, there needs to be a specific linkage between user actions and the resulting effects of those actions on the overall value to the organization.”

“Usage without value linkage is a waste and will result in a failure backlash. A new DAO is like a startup. It requires a product/market fit, business model realization and a lot of users/customers.”

The utility role of the token is a primary consideration in the success of the models that intend to exploit their powers. Tokens are multi-purpose instruments, and we are beginning to see more clarity in how they are being applied.

After analyzing dozens of past and upcoming ICOs, I have come up with the following comprehensive categorization for the role, features and purpose of tokens. This should help prospective and existing ICO-based companies to hone-in and focus their efforts on what will matter for their future success.

The framework I’m proposing has 3 tenets for the token utility: 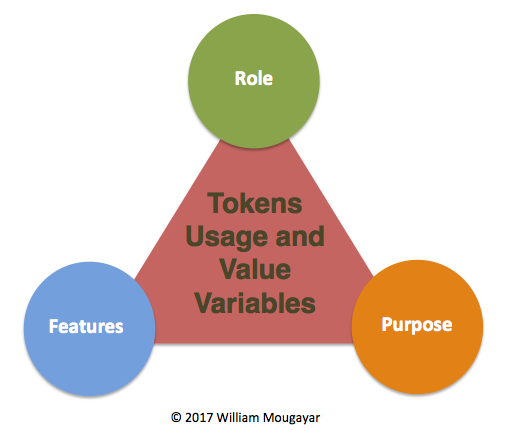 Each role has a key purpose, as depicted in the below chart. 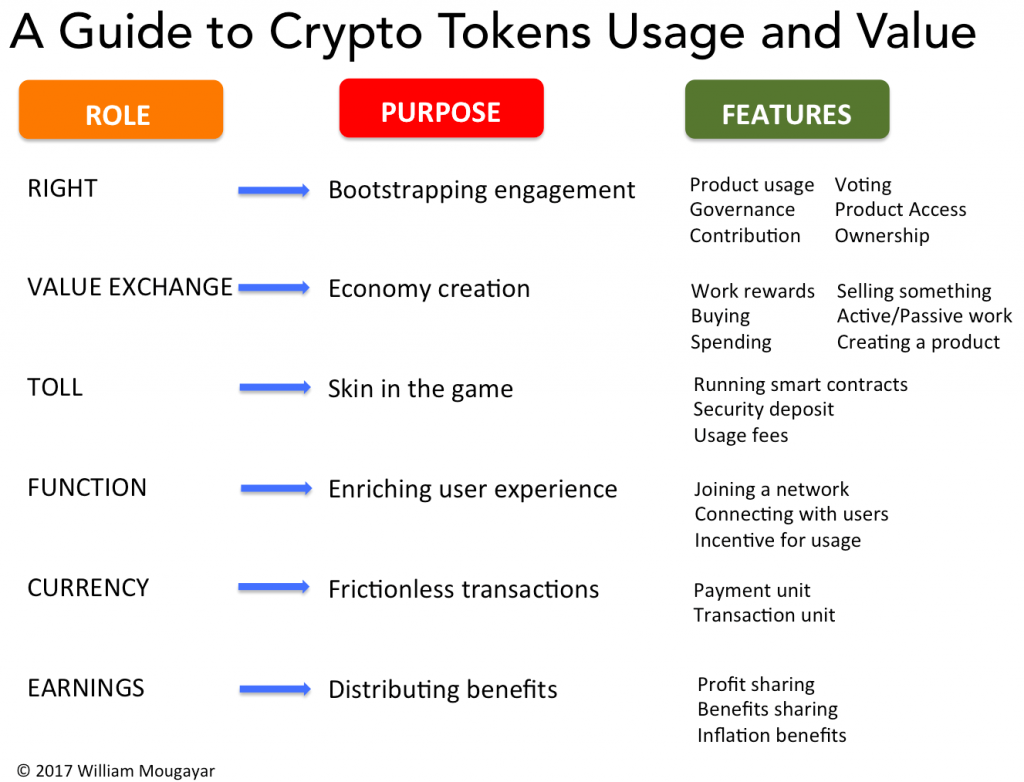 Owning a token bestows a right that results in product usage, a governance action, a given contribution, voting, or plain access to the product or market. In some cases, tokens will grant real ownership, even if most organizations are trying to avoid passing the Howey Test by skirting around the ownership aspect. For examples, look at Numerai, DigixDAO, FirstBlood and Tezos.

The token is also an atomic unit of value exchange inside a particular market or app, resulting in the creation of a transactional economy between buyers and sellers. This consists of features that allow users to earn value and to spend it on services that are internal to the inherent ecosystem. They can earn it by doing active work (real work and actions), or passive work (e.g. sharing data). The creation of such an internal economy is arguably one of the most important outcomes, and one that must be sustained over time. For examples, look at Steemit, Kik, Tezos, and Augur.

Just like paying a toll to use a freeway, the token can be the pay-per-use rail for getting on the blockchain infrastructure or for using the product. This also ensures that users have skin in the game. It can include running smart contracts to perform a specific function, paying for a security deposit, or plain usage fees in the form of transaction fees or other metered metric. For examples, look at Gnosis, Augur, Melonport, Tezos, Dfinity, Ethereum, and Bitcoin.

The token can also be used as a lever to enrich the user experience, including basic actions like joining a network, or connecting with users. It can also be used as an incentive, if it is given in return to begin usage or for on-boarding. For examples, look at Dfinity, Steemit, Civic, and Brave.

The token is a very efficient payment method and transaction engine of choice. This is key for enabling frictionless transactions inside these closed environments. For the first time, companies can be their own payment processors without the cumbersome or costly aspects of traditional financial settlement options. Tokens offer a much lower barrier for processing end-to-end transactions inside a given market.

An equitable redistribution of the resulting increased value is part of what blockchain-based models can enable. Whether it is profit sharing, benefits sharing or other benefits (such as from inflation), sharing the upside with all the stakeholders is expected.

When evaluating a given token-based organization, the more boxes that can be ticked pertaining to the role of the token, the better it would be. The role of tokens is like nails that encroach on your business model. You want more than a single one to hold it firmly in place, and keep it defensible and sustainable.

This is where entrepreneurs creativity has been shining, as they invent and create the many ways that a token can be put to use, at the operational level, i.e. as the rubber meets the road. It’s really about innovation at the token level.

If the token usage is obscure, not well explained, or not defensible, there is weakness in that model.

I’m not sure that app coins vs. protocol coins are the right way to segment these tokens. It doesn’t provide added clarity to an already obscure and new practice.

Here is a proposed set of questions to ask. If you are an ICO-based organization, give yourself 1 point for each yes answer, totalling a maximum of 20 points:

Keep in mind that even if a company ticks the above list with a high score, they still need to execute on it. So, this list is more necessary than sufficient, for success.

All ICO-based companies are encouraged to review their token usage. The more usage scenarios they can check, the more resilient their Token-to-Market fit might be.