The first day of the New Year brings new predictions and maybe new wisdom. It is a time of reflection, and it’s a short period when looking-back and looking-ahead blur into a big ball of thinking. At least, that’s the case for me, today on January 1st, 2016.

The Web was the linchpin for our online experiences, but it has gotten too crowded for some, and is now becoming a little too centralized. What I’m seeing is the emergence of many worlds to the Internet, besides the World Wide Web as we know it. And these mini worlds will become gradually more distinct as we go forward, although there will be plenty of linkages between them.

What I’m calling the Meta Webs is a collection of: 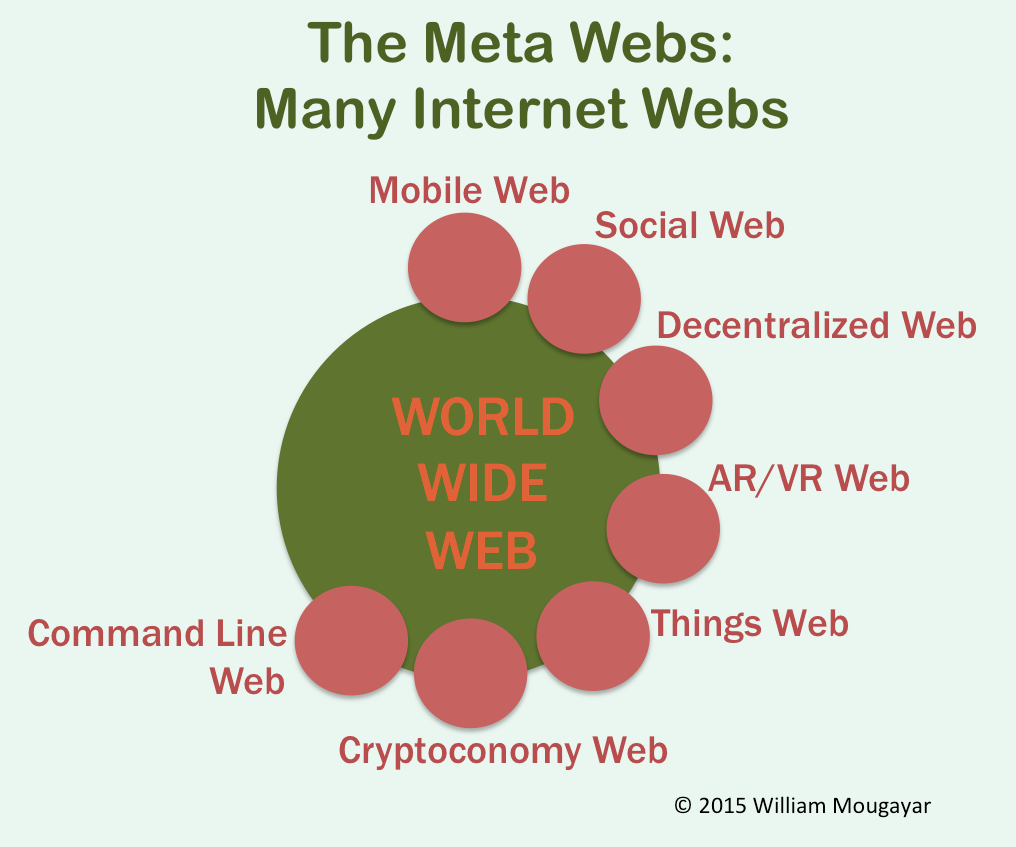 The World Wide Web (or Web) is where it all started. You type an address, and you see pages of content, or you get into a consumer or enterprise application that is hosted directly on servers or indirectly in computing clouds, which are really networks of computers. Desktops dominate usage of the WWW.

The Mobile Web was the first ecosystem to break free from the Web itself. Technically, you can access the Web from a mobile smartphone, and do almost everything you want from there, and sometimes more, e.g. using your smartphone as a sensor or as a command-giving device to the ambient or connected environment. We can be mobile without touching “the web”, i.e. by staying inside Apps on a mobile phone, but we can also enjoy accessing data and cloud apps that live behind the Web.

The Social Web has carved itself as a slice off the world wide web and mobile web, but it is also a destination of its own. Facebook and Twitter are its base, and one could live and stay in those two locations and not miss a whole lot about what is happening on the web. In essence, they are a socially-curated window into the big web.

Augmented Reality & Virtual Reality are areas I’m still learning about, but I can’t see them separated, because I think they might need each other. A definition from a Quora post states that “Augmented reality embeds digital information into real-world contexts, and Virtual reality creates digital contexts that behave in ways that mimic real-world analogues.” Re/Code calls it Mixed Reality, and maybe that’s how it will end-up, as a mix of online, reality, virtuality and augmentation services. I’d like to see innovation go beyond gaming and entertainment, into healthcare, education and other business applications.

Decentralized Web is one of the least developed aspects of the web. Think peer-to-peer applications where you are directly connected to other users or their services, and you don’t get the illusion of being on the web. The best old examples are when you use BitTorrent in a native mode to access files or videos straight from your computer. And new examples that will come to the fore in 2016 include specialized applications like OpenBazaar (disclosure: I’m on their BoD and an investor), where you really step into a different world that doesn’t even look like a website or a traditional app. Trust-based services via blockchains will be part of the decentralized web, so it may start to get big quickly.

The Things Web is really the Internet of Things, aka Internet of Everything. It’s when physical things become connected to the Internet in a wireless mode or via wires, and they take on a new life, as “smart things”. I’d like to see more work there, as it appears fragmented, but maybe that’s how it will always be.

The Cryptoconomy Web is the least known of the emerging Webs. I’ve started to describe How The Cryptoconomy Will be Created, and how value can be produced and moved natively when you tie a cryptocurrency (or token) to your business operations for the purpose of real value exchange between participants, therefore creating new wealth from these new types of activities. We are in the very early stages of this segment, but we will see some real examples take shape this year.

Command Line Web is also a new addition that became more visible in 2015, and some of the early services include the “bots” inside Slack, the Telegram Bot Platform, and Slash via text messaging. The basic idea is to receive answers by querying the web or services via simple command line text, such as /newpoll or “what about here /foursquare for mexican food”. Also, watch for messaging platforms like Kik who will undoubtedly incorporate more of these services, as they have hinted about it after the WeChat investment.

So, in 2016, we will begin to see more distinctive lines between these many webs, and we will also see them interact with each other. I will commit to reviewing these predictions at the end of December 2016 to assess progress in the seven categories.