For every day that passes, I see more and more analogies between the Internet’s early years and today’s status with the blockchain’s evolution. In 1994, when the web came along, websites were the novelty, and up until about 1998, we kept lists of Fortune 500 companies with or without websites. It took about three years before most companies were on-board. Then, many of these early sites were criticized for being just glorified brochures or information sheets, and we looked to Amazon as one of the few companies that actually conducted business on the Internet.

Fast forward to 2015. The blockchain is the new website. Yes, blockchains are geeky, (and the challenge is to take out that geekiness), but fairly soon, every company will have a blockchain, or be on a blockchain, or several ones, just as organizations are involved in many websites today.

Why is the blockchain like a website, and what’s the novelty that blockchains bring to companies, individuals, society and governance?

If the website was the starting point, let’s remember the key mini-revolutions that the Internet brought us since 1994: Personal Communications, Self-Publishing, E-Commerce and the Social Web. In hindsight, each of these four phases was defined by the functions they disrupted: the post-office, print media, supply chains/physical stores, and the real world.

From 2015 onward, we will enter the Blockchain Promise phase, demarcated by the key theme of Decentralization of Trust, unleashing the advent of value flow without intermediaries. 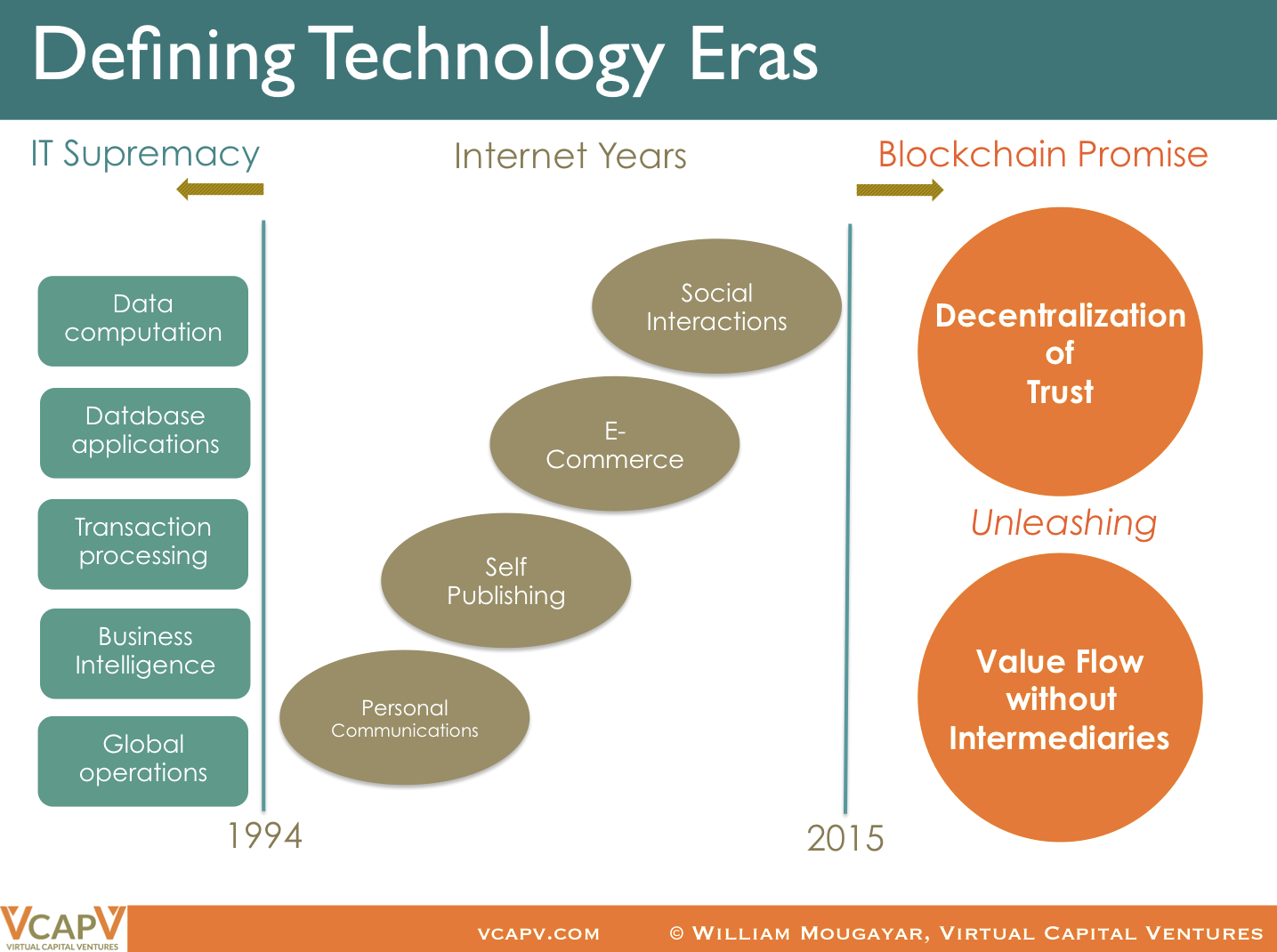 The blockchain is therefore a capability for Exchanging Assets Without Central Intermediaries. With the decentralization of trust, we will be able to exchange anything we own, and challenging existing trusted authorities and custodians that typically held the keys to accessing our assets, or verifying their authenticity.

We can think of Bitcoin as the training ground for what blockchains can enable, because Bitcoin is the most widely used blockchain application, containing all the required elements of a new economic ecosystem with committed participants and a good degree of technological, business process, societal and governance innovation.

Bitcoin, the cryptocurrency, is the quintessential digital asset class that moves efficiently and transparently across a global blockchain that knows no boundaries. Think about other asset classes that you are familiar with that can mimic Bitcoin’s capabilities, and you can start to imagine some of the possibilities. Therefore, if you haven’t used Bitcoin first-hand, you may not get the inherent advantage of a quicker appreciation and understanding of its potential. Seeing assets move swiftly without intermediaries is an eye opening experience, and that is just a starting point. It’s like surfing the web for the first time, which suddenly gives ideas about the possibilities ahead.

The fundamental innovation with the blockchain is that the ownership of the asset is with the owner of the asset, not with a (central) party who owns a database that points to a record that says who is the owner. The current status of accounts and ledgers for money or other assets are really mirrors of some (central) database that determines who owns what. When you initiate a transaction from your own accord, the database reacts by conducting checks and balances, and then makes an update that reflects the changes after the finality of a settlement takes place. If the central authority wanted to lock out user/ownership access, they can.

Instead of requiring each central intermediary to maintain their own database, and burdening them with reconciling it with another recipient database, the blockchain is a record that is shared by multiple parties who have a stake in it, and agree to participate by updating a single version of the database (ledger), each adding their own part of the pie. But this read/write aspect is not the only difference. There is added granularity around access rights by whom, of what, when, and under what conditions, yielding an entire spectrum of programmability and optionality.

Imagine if any real world asset could be mirrored on the blockchain either directly (via transfer or creation), or indirectly (via anchoring), it would create a large inventory of tradeable blockchain assets, and a resulting groundswell of economic activity.

So, the first steps involve finding what is appropriate for the blockchain, starting with your current operations. Just as with your first website when the question was: “what information can we publish on it?”, there are initial questions you can try answering first, to uncover potential blockchain use cases. Namely:

Therefore, the blockchain is an asset normalization platform that can enable a new liquidity in transactions, hence creating large networks of usage and value effects, with benefits in speed, cost, quality or outcomes. For example, what if all the loyalty points and rewards you own could be tradeable against a common cryptocurrency that is global and universal, and that would create a new giant marketplace of value exchange.

Moving assets, identities, ownerships, contracts, balances, records or data on the blockchain may be the first phase of getting direct exposure to it, and the equivalent of the electronic brochures depicted by the first websites in the mid-90’s.

How do you initiate steps to get you there?

Scan each area of your operations, and retrace your steps from when you first dipped into the web, and find out if there are analogies worth implementing.

Study how to write smart contracts, which is the basic unit of programming a blockchain for business purposes. It is the equivalent of being taught HTML and Java during the early Internet days. And master how to create assets or tokenize existing ones on a blockchain. Learn how to interact with some of the leading blockchain APIs and become versed in how to program a blockchain. Acquire this knowledge internally, and don’t outsource it, because you would be outsourcing the experience you need to gain from your own direct interactions with the technology. Finally, pair a technical person on your team with a business manager, and let them keep their minds in lockstep until their creativity juices start flowing into these magical moments that happen when business and technology understand each other. Repeat that pairing process across as many departments or business units as needed.

Think of any current process that can be replaced by a decentralization-focused construct that can be governed by blockchain transactions, where value can be created and exchanged.
Similar to the web, you will be able to set-up private blockchains (like a private Intranet). And you will be expected to link your blockchain with other companies’ blockchains, so getting ready internally will make you ready to deal with your partners.

Some people say the word blockchain is obscure and we need a better, friendlier word. But I don’t necessarily agree, unless you’d like to replace it by “exchanging assets without central intermediaries”, or “programmable trust language”, or “distributed ledger”, but each one of these verbose options offers a limited definition. The Blockchain is a good choice of words, and we will soon get used to it, just as we did with the Web, the Internet, http, TCP/IP and other new technological innovations that keep entering our vocabulary.

Like the Internet and the early websites, you need to get on the blockchain first, before you can uncover new and unique use cases where innovation can thrive, and where new services, opportunities and markets will be created.

Place the blockchain on your agenda now; strategically, tactically, operationally and educationally.

The blockchain is on its way. It is destined to become the new website.

Your product is launched. Now what?