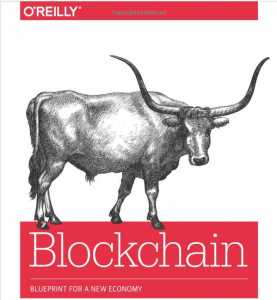 Blockchain: Blueprint for a New Economy is an intermediate to advanced level book on the blockchain’s applications across a variety of sectors. It is written by Melanie Swan, a science and technology innovator and philosopher who is also the founder of the Institute for Blockchain Studies.

The book is fairly current, as if it was finished yesterday, and I must assume that the publisher O’Reilly has been collapsing the time it takes from final manuscript to market availability. Of course, that would be the minimum needed in the fast pace cryptocurrency space where even dog year speed is perceived to be slow.

Overall, this is rather short book (100 effective pages) , but don’t be fooled; it contains some dense reading, and you’ll be left with an excellent reference guide for a lot of the players and actors in this space. This isn’t an entry-level book, so if you aren’t already familiar with basic concepts related to cryptocurrency and the Bitcoin space, then I suggest starting with The Age of Cryptocurrency which I have recently reviewed.

“The potential benefits of the blockchain are more than just economic — they extend into political, humanitarian, social, and scientific domains — and the technological capacity of the blockchain is already being harnessed by specific groups to address real-world problems.”

The book starts with a long Preface that reads like a philosophical essay on the future of the blockchain, and the main chapters of the book are:

The book is an alphabet soup on bitcoin, the blockchain, and cryptocurrency; and it will definitely open-up your imagination to what’s possible. It’s a realistic book, but the realizations outlined may take 5-10 years to fully materialize. That’s OK, because I believe the cryptocurrency technological cycle is going to be a long one [ref: The Carlota Perez Factor]. The book is mostly free of hype, and I like that. I’ve already expressed the hope we stay grounded in reality as far as the Bitcoin ecosystem is concerned.

“The blockchain is fundamentally a new paradigm for organizing activity with less friction and more efficiency, and at much greater scale than current paradigms.”

True, “activity” is a good way to think generically about a blockchain’s atomic unit movement, and the “value” factor is also part of that equation. The book does covers the blockchain’s role in value creation, storage, attribution, transfer, and appreciation.

I had recently been exposed to Gilles Deleuze via another book that mentioned him extensively, and have recently become fascinated by his work, but enough on that digression. Definitely, you can’t talk blockchain without understanding the decentralization ramifications, but I think we have just begun to scratch the surface on this topic.

On the critiquing side, the book was  light on outlining the “business model challenges” that the blockchain faces, which I think is an important consideration, given that great technology alone doesn’t get widely adopted unless we can figure out how it fits with the current business reality (although sometimes we need to invent a new reality and throw out the old one).

And in light of the exhaustive list of blockchain applications that are described; what is currently being done, what’s possible, and what we are only dreaming is all blended together; so it all may appear confusing or overwhelming. Unless you’re really into the space, you may not be able to separate the factual from aspirational parts of where the blockchain applications can go. But that may not be that relevant, because the book sparks the imagination rightfully so, at so many levels, and the exhaustive list and accounts of blockchain applications that are enumerated make-up for that minor shortcoming. As the title indicates, it is a “blueprint” after all, not a guide, so you’ll have to put the pieces of the puzzle together yourself.

Now we have a trilogy of cryptocurrency related books that I’m recommending. If you’re a developer, read Andreas Antonopoulos book, Mastering Bitcoin: Unlocking Digital Cryptocurrencies. If you’re a consumer that is starting out, read The Age of Cryptocurrency: How Bitcoin and Digital Money Are Challenging the Global Economic Order. But if you are a business oriented entrepreneur, executive, investor or visionary, then this book will hopefully give you many ideas for how you might like to get involved.

[Disclaimer: I do not know Melanie Swan and haven’t been contacted by her to write this review.]

Best Practices in Transparency and Reporting for Cryptocurrency Crowdsales