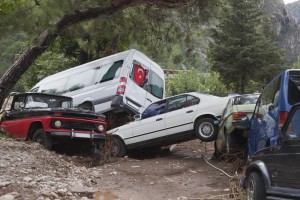 I’m seeing early signs that we could be headed towards an increased risk of a Bitcoin crash. But, if it happens, this crash will be about the crypto-tech startup ecosystem, not the currency’s price.

I’ve seen this movie before, during the Internet crash, and it reminded me that the single most important reason for that crash wasn’t its visible parts; i.e. high valuations, companies going public too early, average consumers losing money in the stock market, and VCs funding the wrong business models.

The single biggest spark that led to the above symptoms and started the Internet crash was simple:
Hyping the Internet and misunderstanding its impact by “rushing” the assumptions about its evolution.

Everything was going well during the early Internet years. Clear heads were prevailing until the media started to hype things in 1999. Around that time, I was an opinion columnist at Business 2.0, after I had written my second book, Opening Digital Markets (in 1997), a management-style book on Internet business strategies where I specifically avoided hype.

Then in September 1999, there was a turning moment with this Business 2.0 issue’s cover that symbolized the start of the Internet hype madness. 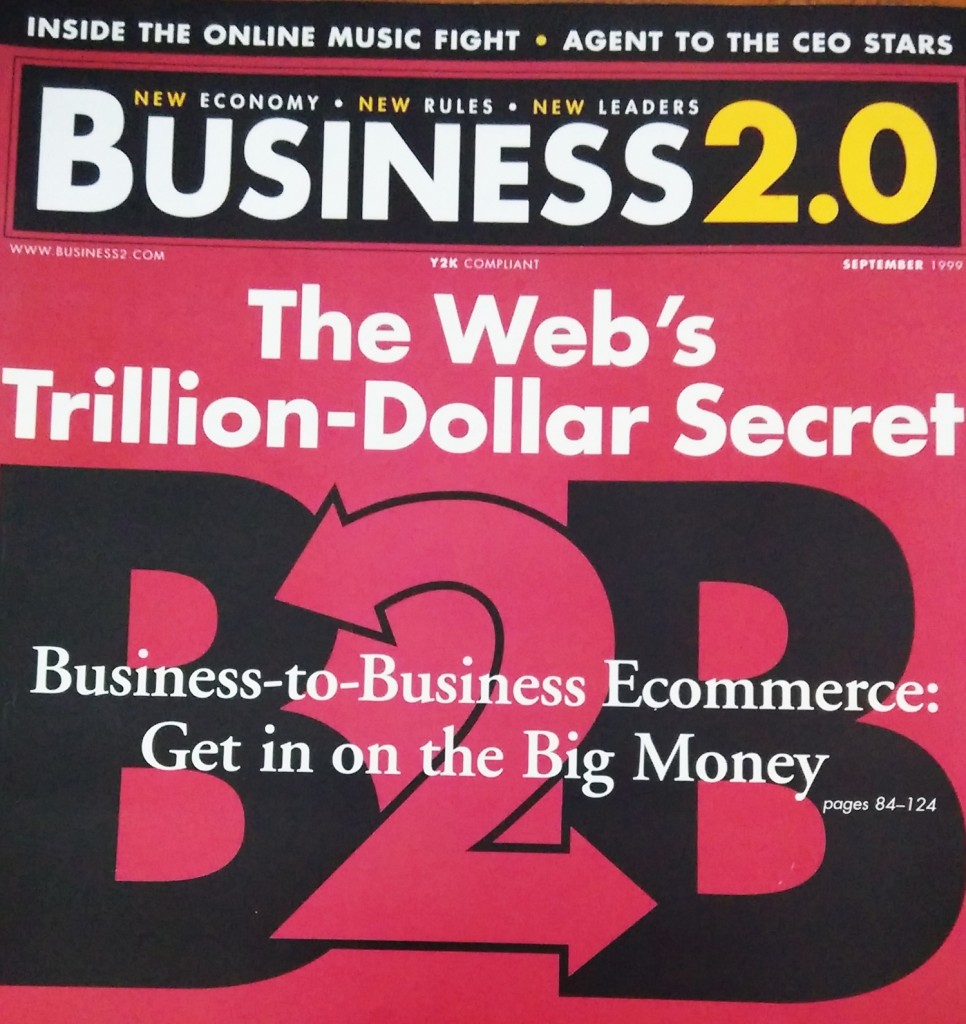 Business 2.0 was the standard bearer for the “New Economy” and widely read. That issue quoted a Forrester Research prediction that the B2B market would reach $1 Trillion in 2003, and basically was saying “all aboard”. Well…not so fast. They were right about that number, but off by 10 years for its realization.

So, basically that is what started the media hype around the Internet’s impact and the number of “billions of dollars in market size opportunities”. There was no realistic sense about how long it would take for all of it to actually happen.

Then, the snowball effect started. Amazon was being used a validation that all retail sales would be dead. Suddenly, the Internet was the answer to everything, from pet supplies to food delivery. In the B2B space, electronic marketplaces were supposed to replace every supply chain on earth, while “new” intermediaries were going to kill the bricks and mortar ones. And the list goes on with market size aberrations reaching billions and billions of dollars. Ignorance led to greed which led to misunderstandings, which led to a lot of money being poured too early, which led to a lot of people being hurt financially and psychologically.

Bitcoin and its incredibly rich crypto-tech ecosystem are facing a similar challenge, and could face the same fate, if we are not careful.

Yes, that was 2000, i.e. 15 years ago, but that was only 6 years after the browser was commercialized. Today, we’re entering 2015, about 6 years after Bitcoin was launched. OK, we haven’t had that irrational exuberance moment yet (except perhaps for a brief moment when the Bitcoin price reached $1,240 in December 2013), and I hope we never will, but we are entering a critical phase where germs for that hype are present in the system.

As exciting as it may be, Bitcoin and the Blockchain are *not* the answer to everything, at least not initially. And not all Bitcoin companies will be successful.

Let’s not get a false sense of security and confidence just because the amounts being invested in crypto-tech startups are smaller than in 1999. Remember, it was a lot more expensive to launch products in 1999 than it is today, perhaps X10 or more. So, when we see several seed deals at about $500K-$1.5M per round, that’s a lot of money. Today, these amounts enable teams of 5-8 engineers and designers to launch significant products, and with 12-18 months runway to comfortably do it.

With that historical analogy backdrop in mind, my warning is obvious. If we rush Bitcoin with hyperbolic promises, it will crash. And what will actually crash will be the companies that are getting funded today by money or sweat equities, and with their entrepreneurial dreams.

We could replace the word Internet by “crypto-tech”, and the same symptom we need to avoid applies today:
Hyping crypto-tech and misunderstanding its impact by “rushing” the assumptions about its evolution.

You might ask,- this is 2015, so aren’t we resilient and antifragile? Yes info-tech is resilient. Bitcoin is resilient, but the crypto-tech ecosystem around is not. It is frail, as I see it. It is subject to potentially succumb to its own version of a dotcom crash.

The Risks of Crowd-sales

At the heart of this increased risk is the self-booted, crypto-enabled, crowd-sale phenomenon which is gaining popularity. It is a powerful feature of the cryptocurrency platforms and protocols, but we should be careful in how we manipulate this type of an instrument.

The pre-mines, pre-sales and crowd-sales are just promises to deliver. Founders get money to develop stuff. This is like a big angel/seed round, but with no strings attached and loose diligence. These crowd-sales come with promises of self-accountability and transparency, but at much lower standards of scrutiny than in a traditional venture capital process.

The initial ramp-up often depends on how many people they can dupe into the crowd-sale itself.

Although some of these crowd-sales have shown some transparency, it is not near the required levels.

Many of the Distributed Autonomous Organizations, platforms and protocols are fairly theoretical at their inception. But will they work in reality? As I outlined previously, the operational framework around DAO’s must not be under-estimated. And there are no standards of reporting practices for DAO’s or early crowd-sales companies.

First, a few discipline-related principles to keep in mind.

When you see actors in the ecosystem that want to rush it, call them on it.

When you see task forces discussing regulation, question them on it. (it’s still too early for that)

It makes no sense to raise $10 million to create a new protocol with marginal differences from the two dozen that already exist. At least not by taking public money. These are high risk adventures, and they should be funded by professional investors, not naive consumers.

Flippant predictions that Bitcoin will take over the financial system, its trading exchanges and banking infrastructure are just too hyperbolic and do not help its cause. And they certainly are to be dismissed when coming from people that knew nothing about banking or business two years prior.

I’m all for ideas. It’s good to have lots of ideas, but not all ideas are great. Bad ideas can kill you faster than good ideas will lift you. Bad ideas make us drunk and thirsty, as we clamor for their realization, but they can also cloud our thinking, and make us poor judges, especially as we pour good money and time after them.

I’m all for the magic of entrepreneurship and what determined entrepreneurs can accomplish when the odds are against them. I love that, but I also feel for entrepreneurs when their dreams are shattered because they were being mislead.

Experienced VCs are doing their diligence. But there is a lot of optimism everywhere, and that is worrisome.

If the average visible success rate for startups is 5%, then I don’t see why this would be different for crypto-tech startups. This means most of them will not succeed. That’s the nature of the beast, but we just need to keep that in mind.

How to Dampen the Risks

Do we need experimentation and lots of investments in order to find gems and big ideas? Of course, we do.

Yes, many great ideas start by being ridiculed, (e.g. sleeping on someone’s couch, giving a ride to a stranger, publishing in 140 characters bursts, making an instant message disappear after it is received, and so on), but it takes some skills and hard work for the real things to emerge.

In business, there is typically 5 groups of actors: the professionals, the experienced, the amateurs, the ignorants (a nicer word would be “mis-informed”), and the charlatans (conscious or subconscious). They all want to be involved. Be aware of who you’re dealing with, and self-aware about who you are in this equation.

If you can’t recognize who is who, or which is which, then stay away. To make things more complicated, professionals could be technically strong, but also ignorant about business experience, so that makes them amateurs when you sum it up.

I’ve been studying and following Bitcoin and crypto-tech for the past 16 months, and I’ve been in the tech industry for over 30 years, and I barely pretend to be an expert, and only in certain parts of what is going on.

That said, I’m as excited as ever about applying crypto-technology to solve big issues and to create new opportunities for business, society and people everywhere; but given a choice, I would rather see us exceed delivery expectations than fall flat on our faces.

If we remain level headed, then Bitcoin, cryptocurrencies, Blockchain technologies and everything around them will change the world. That’s not a hyped statement, because I’m not putting a deadline on it. There will be some hard work ahead before it really happens.

Bitcoin is not a gold rush. There will be bread, gems and water for everybody…in due time.