“Nothing is stronger than the powers of a network whose network effects have come.” 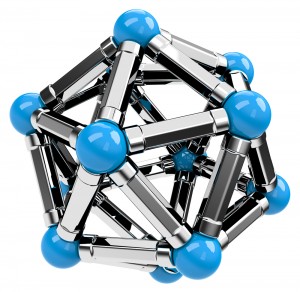 The concept of “Network effects” in the Bitcoin and Blockchain contexts is a misunderstood one, because its inner makings are difficult to grasp accurately. The inherent network effect factors are multi-dimensional, and there aren’t too many people who had the luxury of direct experience in creating viable businesses with large network effects. As consumers, we are mostly users of these networks, and we think we understand them from the outside, but that’s not enough to judge whether network effects exist or not.

The network effect topic often comes into play when discussing Bitcoin vs. “other” activity in the cryptocurrency ecosystem, as observers get the illusion there are “Silos” as Vitalik Buterin aptly described, while others already declare Bitcoin’s network effect supremacy based on its current  currency liquidity and ongoing mining activity.

So, let’s roll back judgment on network effects and start by understanding the various components of “network effect” sausage-making.

I’m going to rely on the best overall definition of network effects I know, as provided by the venture capital firm Union Square Ventures in this post, Investment Thesis @USV. I’ll paraphrase, revise and summarize the various criteria as follows:

In order to properly evaluate the network effect puzzle, we need to look at the ecosystem along three key dimensions: 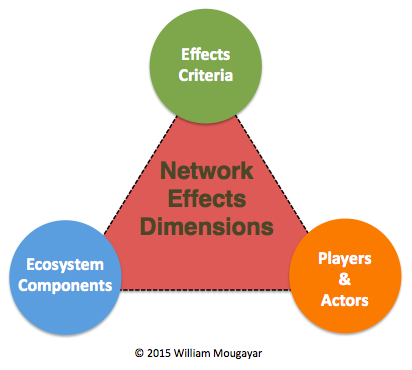 Vitalik Buterin wrote a long post titled On Bitcoin Maximalism, and Currency and Platform Network Effects, where he eloquently dived into the numerous factors surrounding the network effect topic, and I agree with the substance of that article, although I’m proposing a more granular inspection of network effect factors (as depicted above).

The second dimension relates to the targeted ecosystem components, and I see them comprised of:

(I’ve already written in more details about the various segments of the cryptocurrency ecosystem, and also on why the blockchain is the next database paradigm.)

We could place all of this in a matrix, as depicted below, and if you evaluate your favorite players and actors inside each intersecting box, you will find there are a few holes, plenty of opportunities for improvements, and lots of works-in-progress. So, I don’t see how we could arrive at network effect conclusions so early in the evolution of this market. 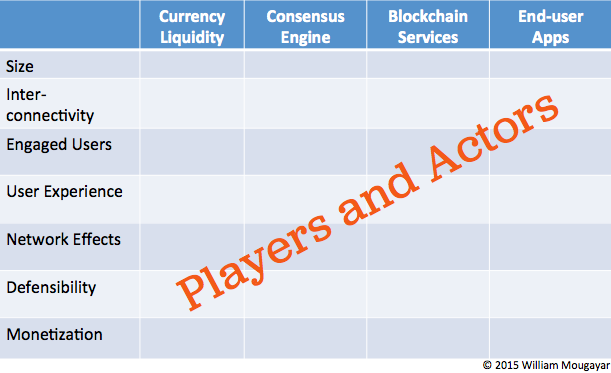 But wait, there is more to the makings of network effect. You also need to count on:

Even if you evaluate Bitcoin proper (because it has revealed itself the most, so far), you will find that it is ahead as a liquid cryptocurrency (although with an undesirable volatility), has a stable consensus process, and a developing blockchain platform environment, but its future evolution may face a few blind spots pertaining to its scalability, and it still lacks a large number of engaged/active users that depend on it, on a daily basis.

The romantic notion that a very large network of Bitcoin (currency) users and Bitcoin-enabled services would vindicate the case for a single blockchain backbone is a stretched promise at best. The flip side of the singularity argument is that the Bitcoin network doesn’t need to replace the Internet, because the Internet is that global network. All what Bitoin (or another cryptocurrency player) has to do is to overlay itself on the Internet with its own set of services, and to achieve network effect within those services and applications, based on their own merits. There is a strong case to be made for keeping Bitcoin (or any other blockchain) as thin platforms and to not bloat them excessively, rather let them enable a multiplicity of use cases on top of all of that.

Look at what happened to the mobile App space. Although we rejoice at the multitude of app availability on each side of the iOS and Android spectrum, for developers it is a divide, and we lament that deep division, as it splits the market in two.

Let’s hope we don’t create an Android vs. iOS situation where the chasm between operating systems, apps and app stores has become the mobile industry’s Achilles’ heel. With crypocurrency-based developments, if we stay within the silos, we might end-up not with just two app stores, but maybe at least a dozen ones, and that’s not a very desirable thing. Instead, let’s keep working with a little bit more hegemony, and a lot more goodwill to make that happen. Maybe we’ll end-up like the cellular carrier industry where you can pick your carrier, plans and phones with a reasonable degree of independence.

Imagine that if you used a certain browser, you would only have partial access to the Internet. That would be awful.

Another plausible end-game scenario might resemble the social media landscape we currently have, i.e. 4 dominant platforms (LinkedIn, Twitter, Facebook, Google+), and multiple other apps that rely on social features (e.g. Foursquare, Tumblr, Buzzfeed, Pinterest , Instagram, Snapchat, Reddit, etc.). “Social” ended-up being a layer and a frame of mind. Maybe the blockchain construct ends-up being an inspirational frame of mind and layer for a new generation of applications and services.

While Bitcoin’s real network effect may continue to get better, that doesn’t mean we can’t have network effects in others. We need to think of the Ecosystem with a big “E”, not a small “e”.

I know several developers that are writing their app services to be blockchain-agnostic in the future.

Let’s not see the multiplicity of work around blockchains and related technologies as as distraction or fragmentation. Rather, we should see it as a multiplicity of innovation and experimentation, and we should celebrate it and support it. Of course, I don’t expect all current players to survive, as in typical startup fashion, many won’t or might get acquired, but even in failures we will learn.

This is not about Bitcoin maximalism, nor is it about an anarcho multi-pluralism. I’m for a dose of reality and for accepting the powers of market forces. Embracing other viable cryptographic solutions and platforms doesn’t necessarily presume Bitcoin’s demise. Bitcoin may end-up as a reference or reserve cryptocurrency of sorts, but only if the value of that currency can sustain itself based on the underlying activity directly related to its network [that’s a loaded statement, btw]. And that’s not because of some technical limitations that Bitcoin has. I’m sure some of them could be resolved over time.

The reality is that the crypto-led computer science revolution is giving us concepts that go way beyond a one-currency type of scenario. Yes, Bitcoin is programmable money, but the Blockchain is also programmable value, programmable governance, programmable contracts, programmable ownership, programmable assets, etc. And we have barely scratched the surface on these applications.

It is too early to tell exactly where will the cryptocurrency landscape will end-up. Maybe it will be like social media ended, with 4 new giant platforms, dozens of large players, thousands of other companies as beneficiaries, and of course, millions if not billions of end-users.

In closing, as I outlined previously. we need to keep sight on a user view of the cryptocurrency landscape, and not just a technology stack one.

So, let’s not forget the basic golden rule of network effects:

without users, there is no network effect.