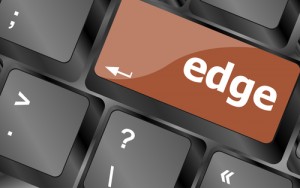 The Peer-to-Peer revolution really started in 1999, inspired by the Napster technology for music file sharing. In 2001, I used to run a website called Peer Intelligence that chronicled and tracked over 100 P2P related technologies across a variety of application areas.

But it took at least another 10 years before we saw significant progress in the application of peer to peer technologies. With the recent advent of the blockchain, peer-to-peer is getting a boost in popularity under the “decentralization” moniker. What started as an anomaly could become a solution to many ailments we have in business, society, technology and politics.

The blockchain also has peer-to-peer distributed technology characteristics. Today, we have the perfect storm forming between these 4 trends:

I’m going to focus on Decentralization as the most significant concept among the above list of four trends.

Decentralization is a powerful concept, because the role the center is being re-defined. The center controls less, but it facilitates more.

Decentralization is going to touch every corner of our world. But to understand it, we need to break it down into its various components and focus on where it’s going to be impactful. Think of the following areas that will be impacted by decentralization:

The network that was the main attraction and a linkage to everything is now self-effacing itself in favor of being an enabler of a multiplicity of one-to-one relationships, instead of a controlling choke point. That (new) center isn’t as visible. Its rules and rituals of engagement and participation are changing.

But it’s not just the network. Society itself is being reconfigured, because control is eroding central organizations, in favor of edge power.

The “network is attacking itself” – its central pieces are getting de-fragmented and re-purposed autonomously.

Unbundling is rising. The more internal pieces are unbundled, the more the center gets weakened, and some of its intrinsic pieces become new enablers on their own.

Devices, processes and people that needed a center to interact are now communicating and connecting with each other directly.

Collectively, more can be done, and collectively more is enabled, and more is re-configured. The participants are at the edges, but not only do they participate, they also reap the benefits.

In conclusion, I realize that I’ve dumped a lot of (unfinished) thoughts in this post, and not provided examples. But this was my first attempt to articulate what’s been in my head in the past 6 months.

So many questions. I welcome a discussion on this topic.