Stroll on the East side of Toronto, with TinEye, Hailo and Vanhawks

Two weeks ago, I took a series of meetings at 3 tech companies in a part of Toronto that is not typically known to have a lot of tech startups: Queen & Sherbourne, on the east side of downtown.

I visited Hailo, TinEye and Vanhawks, three companies within 2 blocks of each other.

When it comes to finding the hotspots for tech startups in Toronto, we already know that several companies have been expanding into the Spadina to Bathurst area, along Queen and King St. But, I wondered if going east is now part of a new trend? 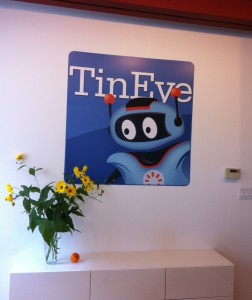 TinEye (also known as Idee) is an old-timer in this part of town. It was founded by veteran entrepreneur Leila Boujnane and her co-founder Paul Bloore in 2008, and was mostly bootstrapped via Leila’s funding. TinEye’s main product is a reverse image search service, and they are today a staple in the Toronto ecosystem. TinEye’s list of clients is impressive, and includes Adobe, AFP, Corbis, Kayak, iStockphoto, Groupon, and Zoosk among several others. One of my favorite segments of the TinEye business is wine apps. Delectable, Drync and Snooth use TinEye’s technology to identify wine bottles by their label. Leila is also a prominent “giver” to the Toronto ecosystem. Her latest volunteering project is co-founding the famous Toronto Maker Faire where she heads the sponsorships initiatives. If you are a tech enthusiast, crafter, maker, scientist, or garage tinkerer, mark your calendar for the Maker Faire week-end extravaganza on November 22-23 at the Toronto Reference Library.

Literally next door to TinEye is Hailo. I really enjoyed walking out of one meeting at 2:44pm, and into the next one 1 min later. Justin Raymond is the local Hailo senior executive. Actually, his job is not that local. Justin is Co-President of Hailo North America, and he oversees Toronto, Chicago, Montreal and Boston, straight from Toronto. I had no idea about that, and thought it was great to see a Canadian manage a part of the US. The back of Hailo’s office opens into a private parking space (which they share with TinEye), and that’s where they on-board new taxi drivers. I also learned about some of their innovative promotion and marketing programs targeting the hospitality and events industries, but I can’t reveal details due to the very competitive nature of their business. Justin slipped me the fact that Hailo is hiring Operational Analysts and Community Managers in Toronto, Montreal and Chicago, so if you’re in the market, please contact him. It was a funny coincidence that a week later, I was in Boston for the day. At the end of  my meetings, I opened the Hailo App from the Techstars office where I was, and dispatched a cab. Within 4 minutes, by the time I made it to the street, the driver arrived, and I was on my way back to the airport. It was a really pleasant and seamless experience, and I had a kick out of telling the taxi driver that I knew the regional Hailo boss, and will give him a personal report about my good experience.

Then I walked two blocks to visit Vanhawks, down from the corner of Sherbourne and Queen, on Princess Street where they had just moved in. Vanhawks is co-founded by two brothers: Ali (age 20) and Sohaib Zahid (age 30), and they were still beaming from a successful crowdfunding campaign, the highest grossing Kickstarter project in Canada. Ali is a proud drop-out from Queens University, after they were accepted at the Founder Fuel Montreal accelerator earlier in the year. Vanhawks is re-imagining the urban bicycle by making it smarter and safer, while loading it with technology sensors and communications capabilities. The Valour Vanhawks bike also has a smartphone companion App, creating an intelligent mesh network of riders and smart feedback loops for its users. Not only is the Valour bike full of technological innovations, its founders have totally understood the value of marketing, and done a super job at communicating their story and the value of their product across the media. This has gained them a hard earned visibility, as they were written-up in dozens of publications. I have no doubt that their brand is destined to become a household name. I spent some time talking to them about marketing and venture capital fund raising. Ali and Sohaib are building a kick-ass team, and getting ready to conquer world markets, right from Toronto. 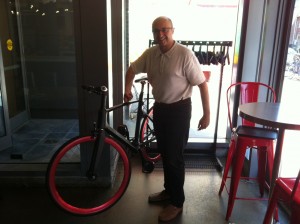 The Valour bike is made of carbon fiber frames.
It is so light, I was able to easily lift it with one finger.

I completed these 3 meetings in less than 3 hours, and wanted to highlight these 3 companies to illustrate the diversity and vibrancy that exist today within the Toronto tech ecosystem.

What’s interesting to note is that each of these companies are at a different type and stage in their growth and evolution, but together, they are a good microcosm of what’s happening in Toronto.