I have just analyzed 93 Canadian tech startups that received capital funding, using the Mattermark database, from January 1st to Oct 15th 2013, excluding Biotech, Cleantech, Pharma, Oil & Gas, and Medical Devices. Aside from 4 seed deals where the amounts weren’t public yet, the total raised was $438 Million (including the HootSuite Series B $165 Million swing deal). Contrast that with $190 Million on 89 deals with 2012.

Is that good or bad?

Even if we back out the HootSuite’s numbers, 2013 funding has already eclipsed 2012 by $83 Million, and that will put Canada on a projected 35-40% growth rate, but the total numbers are still very small compared to the USA. Even with the HootSuite deal, Canada could finish the year with a projected $500 Million of investments, but that is only 3.3% of the total US equivalent investments of approximately $15 Billion per year. 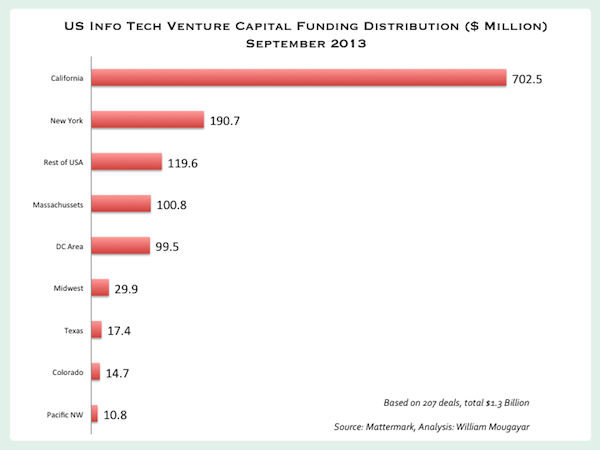 For comparison, just in September alone, $1.3 Billion were invested in the US across 207 deals (source: my private Mattermark analysis).

Let’s dive into this data.

The distribution of deals is heavily tilted towards seed/pre-A, with 52 deals in that segment or 61%, but that’s lower than 69% (56 deals) in 2012. Here’s the distribution graph: 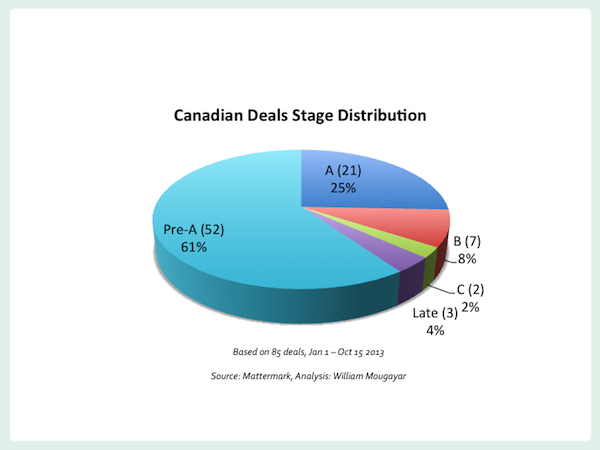 You may want to mentally back-out $165 M from the B segment, because it represented a single deal (HootSuite). The Average Seed/Pre-A deal in Canada was $594K (based on 47 deals with data), the Average A deal was $5.4M, the Average B deal was $9.2 M. These are respectable ratios. 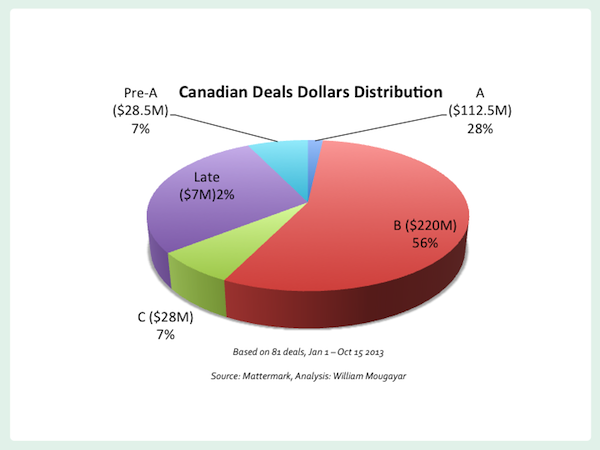 Not surprisingly, Ontario has the largest number of deals and investment levels (excluding counting the HootSuite deal, which is in Vancouver), but BC is a good second overall, easily beating Quebec, even without the HootSuite deal.

The Waterloo-Toronto-Ottawa corridor (if there is one), has always been a point of comparison. Here’s how these 3 pivotal regions stacked in the table below. It is noteworthy to see that Waterloo has garnered over half of Toronto’s investments, with only about a quarter of the number of deals. This shows that Waterloo has definitely emerged as a place with a steady and quality level of startups.

Top Deals of the Year

Let’s focus on the deals that raised over $5 Million. The key revelation is that 11 out of the top 20 top deals were lead by US VC firms.

Canadian vs. US Venture Firms

It is not possible to extract exact amounts coming from US vs. Canadian firms, because the amount splits are never disclosed during rounds with multiple firms, but the US firms were quite well represented. We counted 31 distinct US VCs vs. 30 Canadian VCs that participated in the 89 deals. One could reasonably assume that the US VCs probably contributed to about half of the $438 Million.

The most active Canadian VCs, with 2 or more deals:

The most active US VCs in Canada, with 2 or more deals:

(Note: This analysis is published with permission from Mattermark. If I have missed any deals, or made errors in this analysis, please let me know. Disclaimer: I’m an advisor to Sprylogics, but haven’t voiced an opinion about them, and only provided factual public data.)