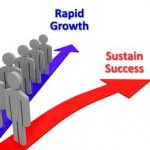 There is a difference between success and growth. It used to be that growth was the result of success, but now, – companies are equating growth with success, and by doing so, they are taking risks in delaying the realization of their business model,- arguably the most important part of success.

The reality of the Growth-Success conundrum is that growth is half the success. The other half is really revenue.

Mark Suster wrote an emotional call to entrepreneurs to not forget about revenues in Why You Need to Ring the Freaking Cash Register. His warning was about not being too lax on revenues, because you’ll be right in .01% of the cases if you delay for too long.

Back to the Business Model

I’ve long argued that the ultimate success for a startup is the Business Model Realization, not growth, or a great product, Forget the Product, Start Focusing on the Model.

You can have a great product with millions of users, and you could be adding thousands of them daily, but if you don’t start tinkering with your business model to reveal the strategy needed for your revenue, then time is passing you by. At the end of the tinkering, revenue is the proof that your business model was valid.

There is a time lag between the 3 phases of a) user growth, b) figuring out the revenue strategy, and c) a successful execution of it. Fred Wilson called this progression Product>Strategy>Model. Practical Translation: Users>Revenue Focus>Execution.

Do not be blind-sighted by your staggering growth numbers, especially if you haven’t figured out the exact way you will be generating revenue. If you have it almost figured out, and it’s a matter of flipping the switch (like Facebook or Twitter did), then that’s great, but you’re in that .01%.

Otherwise, and for the mere mortal startups, you need to start the required iterations to figure out what will work, so better to start doing it while you’re growing, not when your growth slows down. Why? Because if growth slows down (hey, that can happen to anyone), then if your revenue is ramping-up, you will point at that as the key metric of success, and user growth rates will become a moot subject. But if you still haven’t figured out the revenue part, and your growth slows, and you’re running out of cash, then, you’ll remember the 2 key points in Ben Horowitz’s Climate Change post: a) you will do a down round, b) you’re not generating cash, therefore your fate is uncertain.

For consumer businesses, having a large number of users is very critical. A startup (and its valuation) grows because it is doing a good job at attracting users. Understood. There is no argument there. Furthermore, if you focus on revenues too early, it will distract you from focusing on getting users. Got it. And the Network Effect is differentiated via its defensibility. Roger that.

But the runway money that the VC’s gave you is not just to grow users. It’s also to experiment and discover the revenue model.

So if you don’t start activating the necessary triggers to move into some revenue generation early enough, you are delaying your success, perhaps indefinitely. The longer you wait to activate revenue after the conditions are there for you to realize it, the more difficult it will be to actually be successful at getting it, later. There are reasons for that.

Maybe the CEO isn’t able to make a product that sells. Or, maybe the CEO is still behaving like a founder, and not able to instill a sales culture into their startup. If the CEO can’t stop being a founder and start becoming a CEO and do these 2 things, it’s better to find out earlier than later. You need to show that you can sell, not just acquire users or develop products.

So, the second “effect” you want to look for in the Network Effect is the effect you can have on revenues. And that will be based on whether there is a transaction or packaged value somewhere that is monetizable. It’s the Effects of the Network, not just the Network itself that Matters.

The consumer-facing one is not always the same one that will lead you to revenues. If you are gunning for a network effect model, the consumer product may be just the one where you derive data and user engagement from, and then, you can use that combination to develop another product to sell to a business user. Twitter, Google, Foursquare and Facebook are good examples. They sell advertising units and services to businesses, but their user-facing product is very different.

Here are some red flag signs that you’re delaying your Revenue generation too long, despite having reached user growth success and product/market fit: