The Ultimate Guide to a Startup Company Culture

The important thing about a culture for a startup is that it becomes an inner strength that allows you to grow, adapt and perform.

In this post, we outline 4 evolutionary approaches to a startup’s company culture, specifically the evolution of its codification and communication to your existing and future employees. This will also help you to identify the stage of maturity you are at, on your journey to instill a distinct culture for your company. Finally, if you get to all the suggested reading, you will probably end-up with a ton of new ideas for implementing a culture that fits your own situation.

Stage I – It’s Informal and in your head
As a CEO, founder or co-founder, you are typically the germ of that culture. It will start with your footprint, your behaviors, beliefs, and rituals. At the beginning, a startup’ culture is strongly influenced by the founder(s), before it becomes more formal. It’s like “monkey see, monkey do” where the employees are emulating what they see in the founders or leaders of the startup.

Examples: All startups start that way.

Stage II – It’s in a couple of slides
Once you get past Stage I, you suddenly realize that you have more than the embryo of a culture because you keep replaying 3-4 elements of it in your head, or because you have a sudden need to explain what the company stands to a prospective hire or new employee. So you go and make-up a couple of slides or you draft an email with bullets. It’s not perfect yet, but it’s getting there. And you start to use those 2 slides at every company meeting as a reminder to all employees about what you stand for. The culture slides aren’t totally motivational yet, but they do set some good common ground for everybody.

Examples: Most startups with 5-60 employees do this.

Stage III – It’s on the Website
As more patterns and rituals emerge, you start to feel that the 2 slides aren’t enough. You want to enrich them further. You start seeing the need to formalize your culture because you’re hiring a lot more employees and you want prospective employees to learn about your culture on their own so they are attracted to it. So you turn your 4-5 bullets into 8-10 well explained points of about a short paragraph each, or you go deeper into refining and fine-tuning the existing 4-5 key points you already had, and you put it all on a dedicated website section or page with a nice graphic around.

Examples: Twilio, Moz and this especially needed when you’re going from 60 to 240 employees.

Stage IV – It’s an e-Book or 100+ Slides
After some gestation period resulting from the first three phases (where you need some time to let it evolve), you want to shoot for the moon. You want your culture to become Culture with a big C. You feel you need to expand these initial slides or write-ups into something a lot more comprehensive. Armed with a lot of feedback and new data points from your employees, you go spending a few (or a lot of) hours crafting something more unique and polished about your company because you know it’s really worth it. 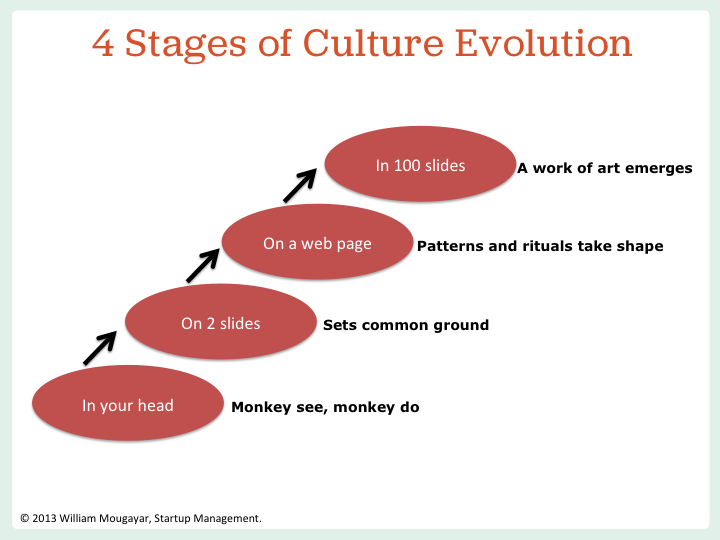 Having worked at HP of 14 years (82-95), I can testify that the HP Way totally permeated the fabric of the company without any doubt or deviation. It was practiced like second nature. I recall it was the first document we had to read and assimilate the minute you were hired. Understanding it and internalizing it was like a rite of passage. There was never any argument about it. It was categorical.

I’ve also been at a large company where culture didn’t get codified until much later. That’s not ideal, and it’s a tough spot to be in, because it is much more difficult to get agreement on it when you’ve already got 6 executives’ opinions. It becomes like mounting a graft instead of growing something organically. And you end-up hiring an external firm to help you codify it and retro-mold it. Better to mold that culture when you’re early and malleable, and let it grow with you.

You need to read the original HP Way on the HP Alumni website. Even better, you can get The HP Way book from Amazon. When it first came out, I recall a copy suddenly appeared on my desk. All employees were given a copy.

Here are some Phase III examples from Moz and Twilio.

Moz
They call it the TAGFEE code. Transparent & Authentic, Generous, Fun, Empathetic, Exceptional.
You can read about it on their Website page, Our TAGFEE code reflects the core values of MOZ.

And you can read this blog and discussion on Brad Feld’s blog:
The power of TAGFEE and just executing

Twilio’s values are published in the form of a telephone dial pad and are fittingly numbering 9. They are centered around the following principle:

You can read them on the Twilio values page,  and there’s a good discussion on the AVC blog, Twilio’s Nine Things

Here are a couple of Phase IV examples from Netflix and HubSpot.

Netflix, Culture as a competitive and survival weapon
The Netflix culture is legendary and took roots in Silicon Valley where they are based. Their culture deck emerged in 2009, and has been relatively intact since then. At that time, the Enron debacle was still fresh in people’s minds, so their deck starts with the chilling reminder that Enron had “Integrity, Communication, Respect and Excellence displayed in their lobby”,- yet their leaders went to jail and the company went bankrupt because of fraud. The message sets the tone for the rest of the 120 slides, and the nuance is clear:

“Actual company values are different from nice-sounding values … they are really the behaviors and skills that are valued in fellow employees”.

You can jump straight into the Netflix culture deck (pdf), or read one of the following 3 related articles:

HubSpot, The culture code
There is no doubt that HubSpot’s culture took some inspiration from the Netflix one, and that’s a good thing. Dharmesh Shah, co-founder & CTO went on a culture communication bend and after spending 200 hours (we don’t recommend you spend 200 hours), he came out with a stellar deck. Not to be outdone by Netflix’s 120 slides, Dharmesh produced a stunning 155 slides, so that’s more than 1 hour’s work per slide. HubSpot is approaching the 500-employee mark, and their future growth demanded that level of culture codification so they can continue to assimilate the people expansion while maintaining the homogeneity and integrity of the culture on a worldwide basis.

The seminal full deck that Dharmesh has laboriously crafted is on this special website called Culture Code, The HubSpot Culture Code: Creating a Company We Love.

And if you haven’t had enough of HubSpot’s culture deck, read Dharmesh’s interview on the Kissmetrics blog

How to Build a Thriving Culture – An Interview with Dharmesh Shah, Co-founder of HubSpot

Culture and Fit, AVC
Fred makes no bones about the linkage between culture and hiring.

Programming your culture, Ben Horowitz
A very practical view on the importance and benefits of a company’s culture.

Peter Thiel on Culture
From his famous CS183 course, via Blake Masters notes.

What company culture IS and IS NOT, Rand Fishkin
Makes the distinction between culture fit and company fit.

1. Ask yourself what will give you the best chance of continuous success for many generations of technology and people? (Netflix)

2. Culture trumps competence, because if you don’t have culture fit for each and every future employee, you’ll spend negative energy to fix someone that is not fitting, and that’s very hard. (Brad Feld)

3. Culture is to recruiting as product is to marketing (HubSpot). Culture and its communication impacts hiring effectiveness.

4. Whether you like it or not, you’re going to have a culture. Why not create one you love? (HubSpot). Yes, and make it your own, instead of having it imposed on you.

5. A company culture helps to distinguish you from competitors and helps you to identify employees that fit your mission (Ben Horowitz)

7. Your culture directly relates to your recruiting success. (Chad Dickerson)

Take a dose of Neflix’s, a dash of HubSpot’s, some inspiration from Moz or Twilio, a sprinkle of the old HP Way, look at your current rituals and patterns, and devise a unique set of your own culture footprint.

Make it your own, but don’t re-invent the wheel totally. Making it stick, believed in and practiced is the key objective. And the golden thing is to let it attract the best talent for you.

Having a company culture is not optional.

And once you start to document it, the process will not be unlike building a product. It takes some iterations to get it right. But once you do and you know it works, don’t change it. Changing a company culture that works can often lead to disasters.

SURVEY
Take the survey and tell us what stage you are at.

SELF-ASSESSMENT TEST
Take this simple self-assessment test and see if you have remembered what you’ve just learned, or what you need to learn.